August 20, 2018 - Housing in Northern Ontario needs major repairs. Nearly one in ten Northern Ontario dwellings have inadequate structure, wiring and/or plumbing, a rate far higher than the rest of the province. On top of that, housing supply is stretched thin, and that will presumably get worse if the North attracts the 6,000 newcomers a year it needs. 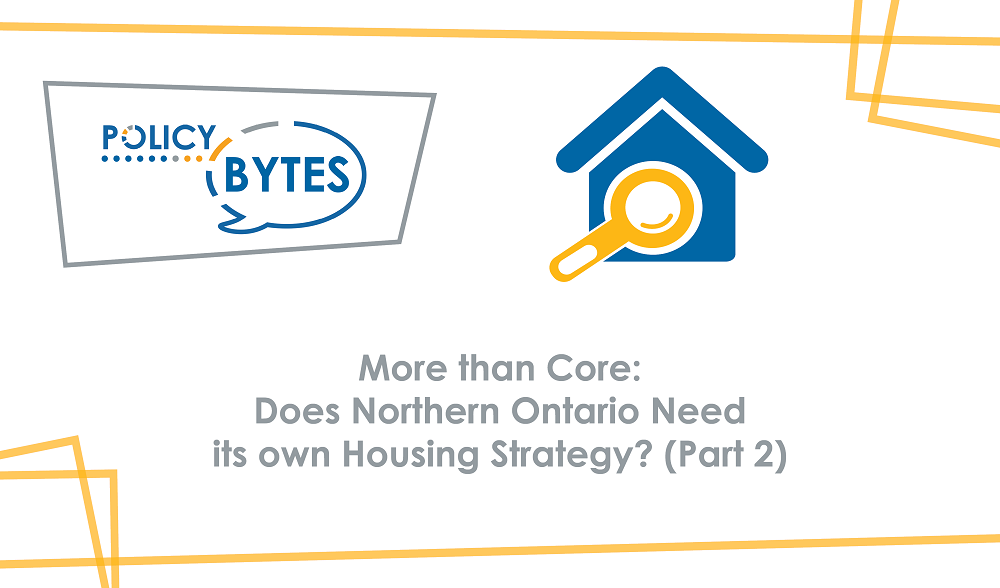 In short, Northern Ontario has clear housing needs, and they are different than the rest of the province.

And yet, there is very little in place to address this. To illustrate, while the National Housing Strategy has a northern component, the money leapfrogs Northern Ontario and instead focuses on the territories. Ontario’s strategy only mentions the North once, and that is merely an administrative footnote.

Perhaps a strategy geared to the North’s unique needs would help lower the rates of inadequate housing. But what might it look like? Below are some things it could entail, though they are starting points that will need deeper analysis before being implemented.

First, it could go beyond core housing need. Core need assesses the number of inadequate, unsuitable and/or unaffordable homes, and was used to allocate funding under Ontario’s Investment in Affordable Housing (2014 Extension) program. The problem is it excludes a number of dwellings, most notably those on First Nations reserves.

That’s a real kicker. Northern Ontario has over 33,000 inadequate households;[1] about 6,500 are not assessed for core need, including 5,300 on reserves.[2] Another 17,500 do not qualify because the household could afford the median rent of acceptable alternative housing in their given community. This means that 73 per cent of the North’s inadequate homes did not count when funding was doled out. Core need or not, those 24,000 shelters still need major repairs, which a housing strategy could help deliver.

Nowhere in the North could use that more than First Nations reserves. Figure 1 shows how much higher inadequate housing rates are in these communities. 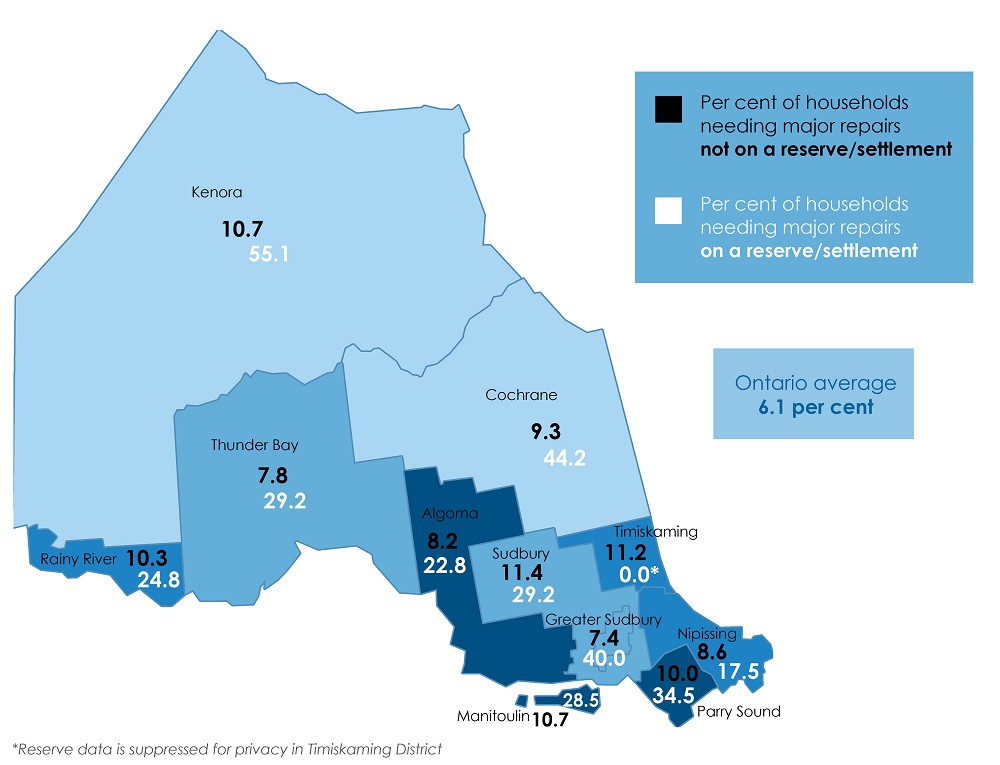 Now, there are Provincial and Federal tools for Indigenous housing, as well as Indigenous housing services providers, all of which do a lot of good. Unfortunately, decisions made in Ottawa for First Nations can leave over a million dollars of housing materials outside waiting for somebody to assemble them, as happened in Nibinamik in 2016.  This, combined with the exclusion from the core need assessment, makes it is clear that First Nations need their own housing solutions.

A Northern Ontario housing strategy could devolve care and control of housing to Indigenous groups. As well, new and enhanced partnerships between all treaty partners would help meet the goals of the United Nations Declaration on the Rights of Indigenous Peoples (UNDRIP), and, more directly, improve the living conditions of the North’s Indigenous peoples.

But, as figure 1 shows, that’s only a partial fix.

84 per cent of the North’s inadequate homes are not on a reserve or settlement.[3] Therefore, every single northern census division would be above the provincial average, regardless of the state of housing on reserves. All in all, a lot of northern homes need work, and the North could sure use people to do that work.

As mentioned in a previous NPI blog, the North needs a lot more skilled tradespeople, especially with so many current workers nearing retirement. A housing strategy could help with that. While it might not change the way trades are viewed or update the apprenticeship system so there are more opportunities (both of which are necessary),  it could, however, recruit more youth, attract skilled immigrants, and play cupid for the misaligned labour market. Northern Ontario needs apprentices and apprentices need experience, which they can get by performing much needed repairs on Northern homes. The strategy could target all three at once with incentives such as direct funding, training grants, tax credits and work programs. Plus, there will likely be spillover benefits.

For evidence, look no further than Rainy River, Wunnumin Lake and Nibinamik First Nations. Each won awards in 2017 for their community led housing programs. Each relied on – and helped develop – local capacity, to provide adequate housing for those who need it. More than that, they leveraged government funding and their specific housing needs to teach valuable construction and planning skills, bring the community together, and even fight substance abuse. Such lessons are worth considering in other communities across Northern Ontario.

All in all, Northern Ontario needs more homes, more workers in the trades, and more local decision-making. A housing strategy targeting the North’s distinct needs touches on all those things. It could also address the inadequate housing that plagues almost all northern communities. A lot of Northerners stand to benefit and not just those in core housing need.

Anthony Noga is a Research Analyst for Northern Policy Institute.

[1] Author’s calculations based on Core Housing Need by Census Divisions, downloaded from http://www12.statcan.gc.ca/census-recensement/2016/dp-pd/chn-biml/index-eng.cfm

[2] Author’s calculations based on “Expanded table: Ranking of census subdivisions by percent of households in dwellings needing major repairs” http://www.ruralontarioinstitute.ca/knowledge-centre/focus-on-rural-ontario

[3] Author’s calculations based on “Expanded table: Ranking of census subdivisions by percent of households in dwellings needing major repairs” http://www.ruralontarioinstitute.ca/knowledge-centre/focus-on-rural-ontario