August 13, 2019 - Immigrants are essential for increasing cultural diversity and addressing labor shortages in Northern Ontario. According to Statistics Canada’s 2011 and 2016 Censuses, the percentage of the Northeast immigrant population had increased 27.68 per cent between 2011 and 2016 while the Northwest saw a 13.99 per cent decline in immigrants in the same period.[i] So, what is happening with the Northwest? To solve this puzzle, let’s zoom into the data and look at the change in number of immigrants in terms of continents and countries of origin. 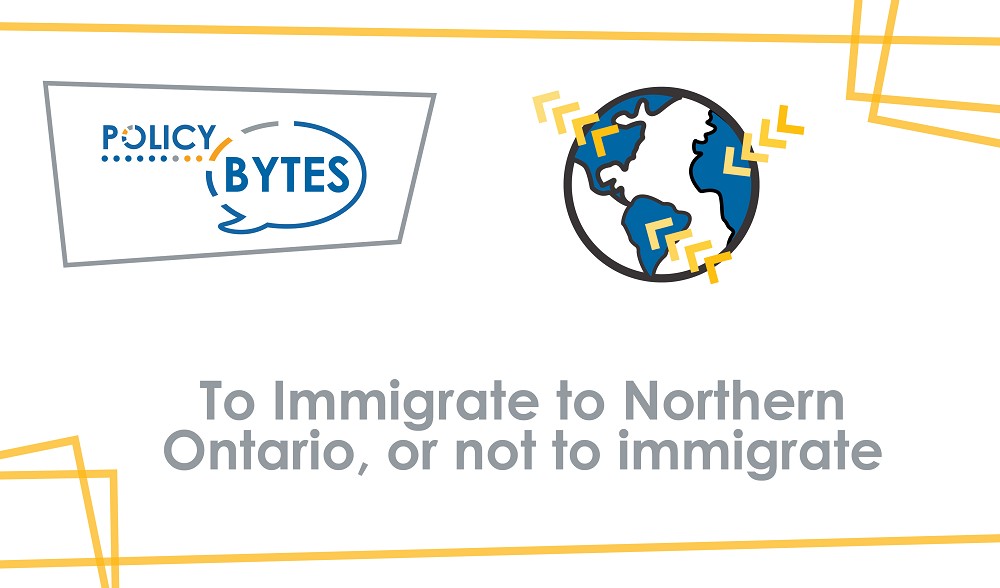 While the number of immigrants coming from Oceania stayed stable between 2011 and 2016 in both Northern Ontario regions, the Northeast has done an excellent job at attracting immigrants from Africa and Asia, with a 29 per cent and a 141 per cent increase, respectively. It is no surprise to see a big ‘jump’ of Asian immigrants in the Northeast because according to the immigration and ethnocultural diversity research from Statistics Canada, Asia (including the Middle East) was the primary source continent of recent immigrants to Canada in 2016, accounting for 61.8 per cent of all newcomers. Furthermore, according to Statistics Canada’s census of population, Canada is expected to have between 55.7 to 57.9 per cent of foreign-born immigrants to be from Asia by 2036. It is also projected for Canada to have 15.4 per cent of immigrants to be from Africa by 2036.

After understanding the ‘big picture’, it is time to take a closer look at the top country where immigrants originate from in each continent.

In the Americas, the United States (US) has been the top country of origin from this continent for both Northern Ontario regions in the past two census periods. However, there was a 36 per cent decline in immigrants from the US to the Northeast with only 230 immigrants between 2011 and 2016 compared to 360 immigrants between 2006 and 2011. Similar conditions applied to the Northwest because the number of US immigrants had decreased from 295 between 2006 and 2011 to 170 between 2011 and 2016, which represents a 42 per cent loss.

For Europe, the United Kingdom (UK) is the most common country of origin from this continent for both Northwest and Northeast immigrants. In 2016, there were 20 immigrants from the UK coming to the Northwest whereas this number was 75 in 2011. Likewise, the number of immigrants was 150 in 2011 and dropped to 90 in 2016 for the Northeast. 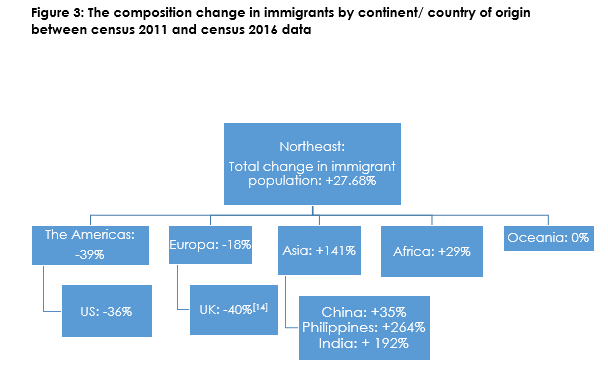 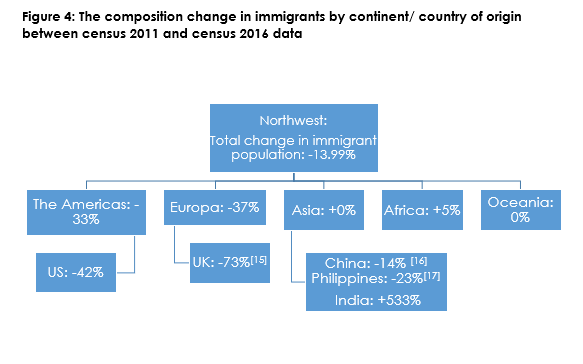 In summary, even though Northern Ontario experienced a loss of immigrants from the Americas and Europe, Northeastern Ontario displayed a significant increase in immigrants from Asia and Africa. With the implementation of the Rural and Northern Immigration Pilot, cities in Northern Ontario could consider targeted approaches to those countries and continents with favourable immigration to the North. Such an approach could help with declining workforce problems and enhance cultural diversity, to name a few benefits.

Irina Chen is a summer Data Analyst at NPI.