May 16, 2019 - This blog first appeared in the January edition of The Walleye 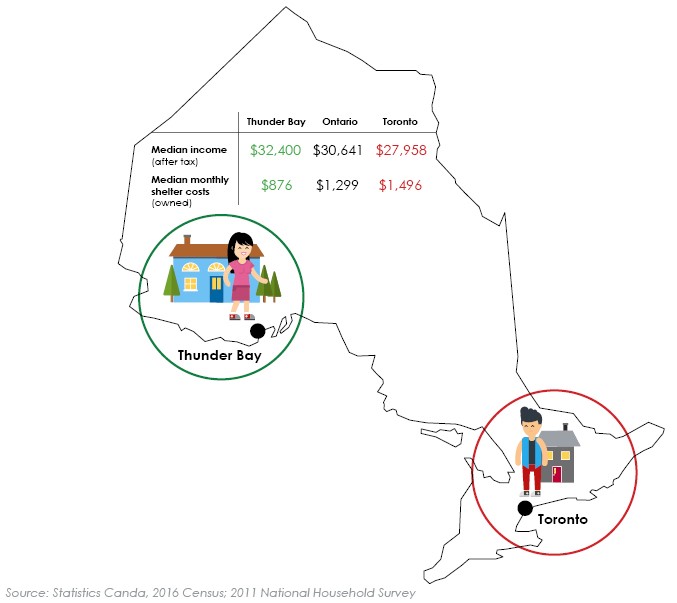 We've all heard that the high costs of gas, electricity and food make living in the North unaffordable, but is it true? Let’s take a look at some cost of living indicators to find out how Thunder Bay stacks up against the rest of the province.

To explore the affordability of housing, we use “shelter costs” as an indicator. Shelter costs include all mortgage/rent/condo fees, as well as property taxes and utilities, including heat and electricity. With all these costs factored in, in 2015 the median Thunder Bay homeowner saved $423 a month compared to the provincial median. That's $5,076 over the course of the year, and $7,440 less than a Toronto homeowner. There was a similar difference in the 2011 National Household Survey, and, if it held for the years in between, the median Thunder Bay homeowner could have saved upwards of $25,000 on their home compared to their provincial equivalent. The gap in price is much closer when it comes to renting, but the median renter in Thunder Bay still paid less than 70% than the median renter in Toronto.

The median value of a home in Thunder Bay is roughly $170,000 less than the provincial median, and about $371,000 less than in Toronto. Not only are homes in Thunder Bay less expensive, but they are generally bigger. Thunder Bay homes average nearly one-and-a-half extra rooms compared to Toronto homes, and for about a third of the price. Between the similar incomes, and much lower home prices, a person can pay off a mortgage more quickly in Thunder Bay than many other places in the province.

It seems that Thunder Bay residents have significantly lower shelter costs than the rest of the province, while earning a comparable income. Stay tuned for NPI's upcoming commentary exploring how these, and other costs, compare for a family of four in cities throughout the province.

This data was collected as a part of an upcoming NPI commentary by Anthony Noga, “A Tale of 10 Cities: Cost of Living Comparison between Northern and Southern Ontario”. If you’d like to learn more, sign up for NPI’s updates on our website, www.northernpolicy.ca, to be notified as soon as the commentary is released.

Anthony Noga is a Research Analyst at NPI.