June 18, 2018 - What is the first thing that comes to mind when you hear the word “rangers”? Most likely, it is an image of park rangers patrolling Northern Ontario’s numerous provincial parks. But think again; the Canadian Rangers play a very different role in Ontario’s northern regions, and it is one that deserves more recognition. 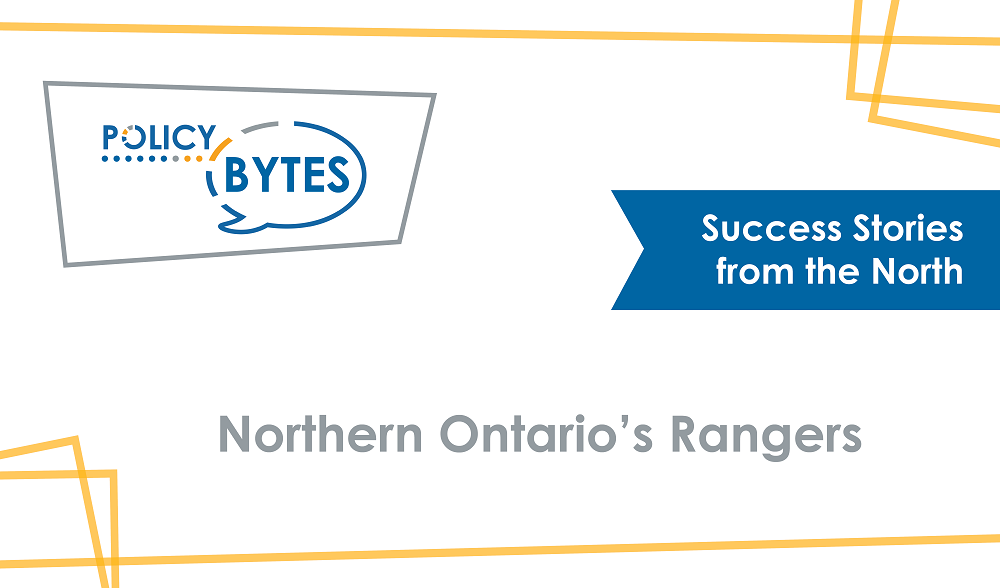 The Canadian Rangers are part-time Canadian Armed Forces reservists, easily distinguishable by their uniforms – bright red hoodies and green digital woodland camouflage pants. They’re divided by geographic location into five Canadian Ranger Patrol Groups (CRPGs) and though they’re sometimes incorrectly referred to as the “Arctic Rangers”, the Patrol Groups are based and operate in remote regions across most of Canada.

The Canadian Rangers has roots in the Pacific Coast Militia Rangers (PCMR), which was formed in 1942, during the Second World War, as a volunteer force that patrolled the British Columbia coastline due to the threat of invasion. The PCMR was disbanded at the end of the war.

Then in 1947, the Canadian Rangers as we know them today was created in order to provide the military with patrol capabilities in Northern Canada due to rising Cold War tensions.

Despite the end of the Cold War, the Rangers continue to help protect Canadian sovereignty, particularly in the Arctic. In addition, they participate in domestic operations, by assisting in search and rescue operations, participating in disaster response and humanitarian efforts, and providing wilderness survival training to other components of the military. In 1996, the Junior Canadian Rangers was created as a youth program for boys and girls ages 12 to 18, providing them with formal training in Ranger, traditional, and life skills. Today, there are around 5,000 Canadian Rangers and over 4,400 Junior Rangers in approximately 200 communities across the country; and they speak 26 different languages and dialects, many of which are Indigenous.

The 3rd Canadian Rangers Patrol Group is based in Ontario, headquartered at the Canadian Forces Base Borden, and all of its patrol areas are entirely in Northern Ontario. There are currently 560 Rangers and 800 Junior Rangers, in 20 patrol areas.1 Over 95 percent of the 3rd CRPG is Indigenous, representing 25 First Nations communities.1

Another one of the Canadian Rangers’ accomplishments is their participation in Operation LENTUS, the Canadian Armed Force’s response to domestic natural disasters. Just this May, the 3rd CRPG assisted in the evacuation of Kashechewan First Nation due to potential flooding risks. Last spring, a similar situation arose and Kashechewan’s Chief Leo Friday was full of praise for the Rangers, saying: “The Rangers did a real good job for us. They helped a lot of people… We’re grateful for all they did for us”. The community’s fire chief and emergency coordinator, Brandon Spence, asserted that “[the Rangers] are doing essential jobs for the community”.

In addition, the Rangers contribute to maintaining Canada’s defence capacity by assisting in training. In 2016 for example, 100 members from 12 patrols of the 3rd CRPG were part of Operation Trillium Response, an exercise that also involved approximately 570 Regular Force and 280 Primary Reserve members, which was aimed at improving operating capabilities in remote areas and under harsh winter environments.

When asked about the perception of the Canadian Rangers in Northern Ontario, Captain Ted Dinning, adjutant of the 3rd CRPG, replied by saying: “We’re very well received in the community and we’re highly sought after”.1 He added that “communities [that don’t currently have the Junior Rangers program] would like to have it”.1 These same sentiments are echoed by the Nishnawbe Aski Nation (NAN), on whose territory a significant number of Rangers patrols are based. In a provided statement, Grand Chief Alvin Fiddler said: “We value our relationship with the Canadian Rangers and are encouraged by the expansion of Rangers patrols… We are especially encouraged with the growth of the Junior Rangers program, which is having a positive influence on our youth”.2

Appreciated by the communities that they serve and undoubtedly proud of their duty, the 3rd Canadian Rangers Patrol Group has been a monumental success in Northern Ontario. Having braved the wide expanses of the North, perhaps the next time the word “rangers” comes up, the first thing that will come to your mind is the Canadian Rangers.

1) Interview with Captain Teddy Dinning of the 3rd Canadian Rangers Patrol Group, on May 15th, 2018

2) Written statement from Grand Chief Alvin Fiddler provided by Michael Heintzman, Director of Communications, both of the Nishawbe Aski Nation, on May 15, 2018