April 23, 2018 -This transition briefing is part of Ontario 360's "30 on 30" initiative. Over the month of April, 2018, Ontario 360, housed at University of Toronto's School of Public Policy and Governance, is releasing 30 daily “transition briefings” by a wide range of policy experts on a comprehensive set of issues facing Ontario’s next government. To view all articles, visit http://on360.ca/

Between 2001 and 2016, almost 30 percent of Canada’s immigrants – 356,930 people – made Toronto their new home. This was nearly double Montreal’s total which was the second highest in the country. [1] Thunder Bay received 695 immigrants during this period. Sudbury brought in 1,000. This immigration dichotomy is creating economic and social pressures in the Greater Toronto and Hamilton Area (GTAH) and represents a missed opportunity for rural and remote parts of the province – namely Northern Ontario. The incoming government should take policy steps to encourage more immigration to northern parts of the province. 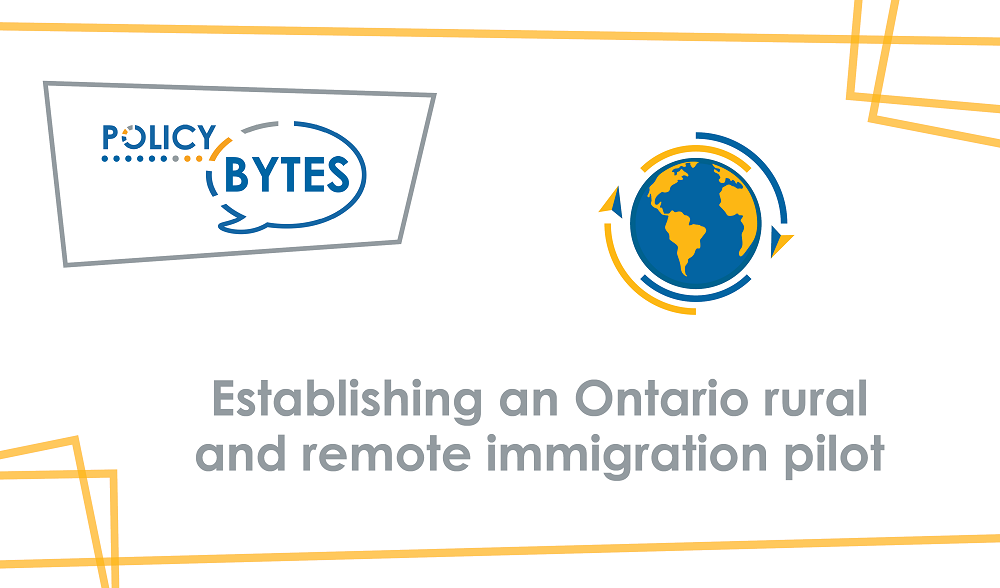 Immigration is a joint responsibility between the federal and provincial governments. One of the ways in which the provinces play a role in setting priorities is called the Province Nominee Program (PNP). The program enables the provinces to target immigration based on their labour market needs and economic development priorities. The program allows provinces such as Ontario to nominate for permanent residence individuals who have the skills and experience to contribute to Ontario’s economy.

The size and scope of Ontario’s PNP is the subject of negotiation with the federal government. As research by the Institute for Competitiveness and Prosperity has shown, Ontario’s provincial nominee program is proportionally the smallest among Canada’s provinces. Ontario only selects 3.6 percent of its immigrants, while the rest of the country selects 39.0 percent. To put this in perspective: Quebec has an immigration program that allows the province to select 57.3 percent for economic reasons – almost seventeen times greater than Ontario. [2]

Given that the province likely has a better handle on the labour force and skill requirements of its economy than the federal government, it warrants more control over its immigration intake. The need for additional PNP autonomy echoes the Premier’s Highly Skilled Workforce Expert Panel’s recommendation that Ontario gain control over a larger portion of economic immigrant selection. [3]

The need for reform

But Ontario does not just need more autonomy on immigration policy. There is also a need to think about the provincial distribution of immigration.

Between 2011 and 2016, Toronto attracted more than three-quarters of all immigrants to Ontario. [4]This is not positive for Toronto which is struggling with unaffordable housing in addition to other economic and social challenges. It is not positive for immigrants who have experienced poor employment outcomes in the GTAH. And it is not positive for rural and remote parts of the province which are starving for the labour and dynamism that comes with immigration. There is thus a need for reform.

This needs to change. The province of Ontario has the ability to make it happen, and at little to no extra expense. While secondary attraction efforts should continue, helping immigrants land in a place where their skills are needed, homes are affordable, and the sense of community is strong would diversify the provincial economy while reducing the growing social and economic pressures in the GTAH.

How to move forward

The province could, in theory, simply make a tweak to the existing PNP, limiting the program to areas outside of the GTAH. This would, however, be problematic as it would hamstring growth industries like the IT sector which routinely use the PNP to target and attract desperately needed new talent. It would also encourage new arrivals to cheat, pretending to be interested in areas outside the GTAH while planning to ultimately jump to the big city. If there is only one fast track, you can be sure it would be used in this way. But what if there were two?

Enter the Atlantic Immigration Pilot. Seeing the desperate need to change arrival and settlement patterns in that region, the federal government has initiated an expanded express entry program there. Much like the existing PNPs, the Atlantic Immigration Pilot allows Atlantic Canadian communities to match their skills needs with a potential immigrant’s employment desires. More to the point, the federal government, in partnership with the four Atlantic Provinces, exponentially increased the allocation of fast tracked spots, allowing for settlement allocations and efforts to focus beyond the urban centres.

Manitoba took these types of steps over a decade ago, with amazing and measurable results in towns like Morden. It population in 2006 was 6,571. It reached 8,668 in 2016. An increase of 32 per cent in ten years. [9] Ten years where the population in most of rural and remote Ontario stagnated or declined.

Morden was not looking for rocket scientists and neurobiologists. They were not looking to create new industries or become the next Silicon Valley. They had jobs that were going wanting, in many cases jobs that did not fit the national focus for highly skilled immigrants, but instead fell into the category of semi-skilled trades and professions. By giving those communities the direct ability to market jobs to already vetted immigrant applicants, candidates with the skills and desire to do those jobs, Manitoba led the way in immigration attraction, settlement and retention. Ontario could be next.

Working with the federal government they could expand the provincial allocation of nominees. A pilot targeting rural and remote immigration in Northern Ontario could easily involve as few as 1,000 to 1,500 new immigrants each year. If, after a five-year test period, the evidence demonstrates it works, the pilot could readily be expanded to the rest of rural and remote Ontario. Or not, if it proves ineffective.

On April 9, 2018 in Thunder Bay, the federal government signalled its readiness to join in just such a partnership. Unveiling the Prosperity and Growth Strategy for Northern Ontario (PGSNO) [10] Industry Minister Navdeep Bains made explicit reference to the Atlantic Immigration Pilot as one model of interest when asked how the federal and provincial governments could partner to bring more immigrants to Northern Ontario – a key commitment made in the PGSNO.

There are other policy changes that would support the success of such a pilot. Most would involve the reallocation of existing resources, as opposed to significant investments in new ones. For example, job developers and settlement associations already funded by provincial agencies could be allowed to supply pre-arrival services. Services for people thinking of coming to, or students thinking of staying in, Ontario. Such a change could be capped to a certain percentage of clients, to ensure those in need of supports who are already here don’t get short changed.

The province could similarly insist that a certain percentage of international student employment and co-op efforts (efforts that are already fund) be focused in the areas of the student’s field of study.

Simple, affordable, scalable and evidence-based. What more could a new provincial government looking to grow the province want in a new program?

Charles Cirtwill is President and CEO of Northern Policy Institute. This article first appeared in Ontario 360's "30 on 30" initiative. Over the month of April, 2018, Ontario 360, housed at University of Toronto's School of Public Policy and Governance, is releasing 30 daily “transition briefings” by a wide range of policy experts on a comprehensive set of issues facing Ontario’s next government.

[1] Statistics Canada, Geographic distribution of immigrants and recent immigrants and their proportion within the population of census metropolitan areas, Canada, 2016, (accessed on April 6, 2018). Available at: http://www.statcan.gc.ca/daily-quotidien/171025/t001b-eng.htm.

[2] Institute for Competitiveness and Prosperity, Immigration in Ontario: Achieving best outcomes for newcomers and the economy, June 2017. Available at: https://www.competeprosper.ca/uploads/2017_Immigration_in_Ontario_Achieving_best_outcomes_Full_report.pdf