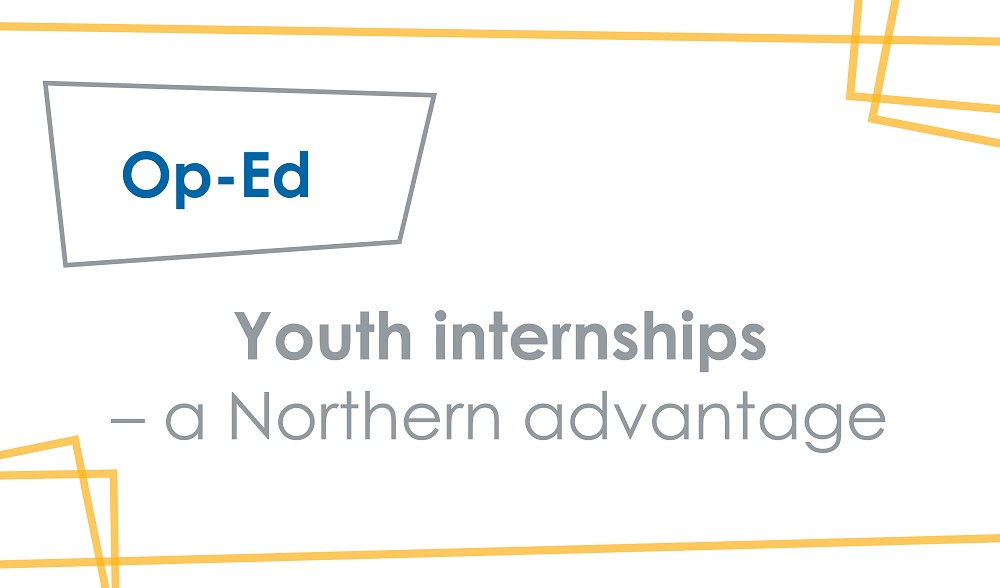 The kids are not fine, folks. But we have the tools in hand to help, now. Ontario’s Northern regions are ideally situated to respond to one of the biggest impacts of the COVID-19 crisis: the disproportionate impact of this downturn on youth. Both FedNor and the Northern Ontario Heritage Fund Corp. (NOHFC) have funded up-and-running and effective internship programs. Those programs could easily be expanded or adjusted to increase their impact during this crisis.

In 2018, NOHFC reported 627 internship jobs created. Each internship costs, in round figures, about $30,000. A quick back-of-the-envelope calculation puts the cost of those placements at around $18 million that year. So doubling the program as part of a stimulus package for Ontario’s Northern regions would cost about $20 million. That would positively impact 600 more young people and 600 additional businesses that employ them. Keeping the program twice the size for two years would be $40 million and help 1,200 youth and 1,200 businesses.

According to the numbers presented on the ‘successes’ section of their website, FedNor’s program is smaller, averaging about 80 students per year since 1997. Again, based on roughly $30,000 per placement, that’s a total cost of $2.4 million per year. Doubling the size of that program is, forgive me, peanuts in the context of the billions we are spending in response to COVID-19.

Full disclosure, Northern Policy Institute is an active user of both of these programs. As a matter of fact, four of our current team members are former interns, including our research manager and our communications coordinator. Intern placements at NPI have been the stepping stone into rural and Northern careers for analysts and communication specialists across the North.

That said, we could enhance the impact of these programs without having to spend more money. FedNor’s rules around internships are a bit more restrictive than those for NOHFC. NOHFC requires the employer to demonstrate the benefit of a student placement for their business. FedNor requires demonstrable economic impact for the region. Making those rules the same for both programs would make it easier to qualify for FedNor internship placements and encourage more employers to apply.

Beyond that, both programs restrict, with a small exception, internships to one year in length. Allowing two-year placements would be a greater incentive to companies to use the program right now, when young people, and especially new graduates, are in need of work. That would, however, reduce the overall number of placements and businesses supported.

We could avoid that tradeoff though. A portion of both programs could be set aside for two-year placements at a lower annual subsidy. Allowing employers to opt to take $20,000 in year one and $10,000 in year two. This would encourage employers themselves to assume more of the risk while delivering greater long-term value for the company and their new employee. In that scenario, the number of placements would remain at current levels and there would be no added costs.

COVID-19 has taken a sledgehammer to youth employment in Canada. According to a study released by the Canadian Labour Economics Forum, hours worked by youth aged 20-29 fell by a third between February and April 2020. Employment in that age group fell by a quarter. The change is so stark that in a graph of labour data from 1980 to 2020, the points for March and April 2020 are so far off the trend line the authors added special labels to point them out.

The kids are not fine, folks. But we have the tools in hand to help, now.

We are already seeing the usual calls for stimulus in the form of shovel-ready infrastructure projects. Building mega-projects is very desirable from a government perspective because you have something tangible to point to when asked what you got for that money. That approach assumes jobs in other parts of the economy will be created as the construction workers buy gas, food, cars, houses and haircuts.

Stimulating across multiple sectors in the form of hiring incentives might not result in a new ring road for your city, but it will get people back to work immediately. It will directly impact more than one sector, and it would still have effects in other areas when the interns spend their paycheques.