August 11, 2020 - According to the most recent available data, Northern Ontario’s Big 5 cities—North Bay, Sault Ste. Marie, Sudbury, Thunder Bay, and Timmins—welcomed  a combined 2 485 Indigenous new arrivals in the year before May 16th 2016 (Figure 1). 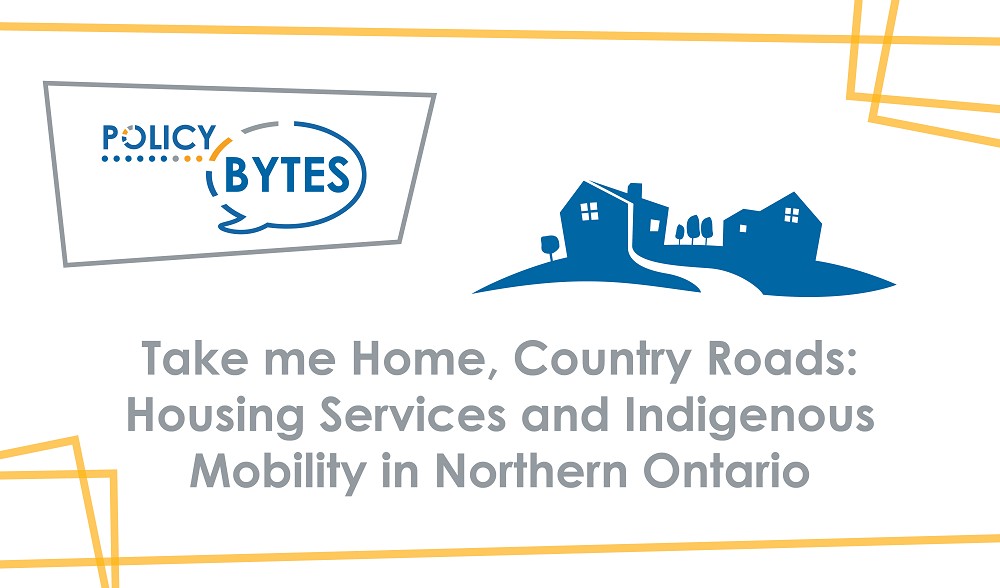 Interestingly, the influx of Indigenous peoples to Northern Ontario’s urban centres doesn’t mean that its reserves are shrinking: in fact, the literature has shown that both reserve and urban centres are experiencing positive migration flows[iii]. The trend in migration seems to be away from rural and smaller urban areas towards reserves and cities, with high rates of back-and-forth migration between the latter two places. Moves between urban areas and reserves can be made so frequently that scholars have named it the “churn” phenomenon, with multiple back-and-forth moves sometimes being made in the same year.

So why are Indigenous peoples making these moves? Sadly, when it comes to Ontario’s western and northern regions—we don’t really know. There is limited research specifically examining Indigenous mobility in the area. Given how localized push and pull factors can be, this is an issue. The broader Indigenous mobility literature indicates that moves to the city are generally made in search of better housing, more education and employment opportunities, or for family reasons[iv]. Moves back to the reserve are generally made for better family support, housing reasons, government benefits, and for greater access to cultural and community practices[v][vi].

Of the list of factors influencing moves, housing stands out as a bi-directional influence: it pulls people out of reserves and towards cities, but it also has the reverse effect, pushing some people living in the city back to reserves. How can the same factor work in both directions? Let’s unpack this a bit.

It has long been known that Indigenous housing on reserves exists in a state of crisis, as a result of colonial government policies and oppressive institutions that were “Never supposed to work” for Indigenous people. As such, many Indigenous individuals living on reserve find themselves in houses that are totally unsuitable and represent unhealthy environments[vii]. They are thus pushed leave in search of greener pastures in urban areas, drawn by images of new development and better perceived conditions.

The grass, however, isn’t always greener. Once arrived in cities, Indigenous peoples are faced with a multitude of barriers stopping them from acquiring suitable housing: racism, landlord discrimination, and poverty all stand in the way of securing housing for the new arrivals[viii]. This often relegates new arrivals to housing that is in poor condition, in disadvantaged parts of town, and not affordable. Even more troubling, a study in Winnipeg found that Indigenous new arrivals stood only a 50/50 chance of finding housing at all. These new arrivals are very likely to make frequent moves within the city in search of long-term housing, which can contribute to other problems like lower educational outcomes, harder service delivery, and social isolation. It makes perfect sense, then, that poor housing conditions in cities and heavily discounted (sometimes free) housing on reserve would push individuals out of urban areas and back towards reserves.

A quick search online shows some very concerning early results. 211north.ca, a website that lists all services available in different cities, shows that there are only two Indigenous housing service providers in each of Sault Ste. Marie, Sudbury, and North Bay, and none in Timmins. In Thunder Bay, there are four providers listed—though it is important to note that Ontario Aboriginal Housing Services, located in Dryden, does provide some service to all of these communities remotely.

If the experiences of Indigenous new arrivals in nearby Winnipeg are at all similar to those in Ontario’s western and northern regions, then there is a grave need for more services. Research done in Winnipeg indicates that the current level of Indigenous housing service provision is inadequate, leaving new arrivals particularly vulnerablexii. It further shows that urban service providers should build relationships with service providers on reserve to ensure adequate housing can be arranged before Indigenous peoples arrive in the city—thus ensuring a smoother transition to and from urban life[x]

Clearly, there needs to be more research seeking to understand the reasons, experiences, and needs of Indigenous migrants in western and northern Ontario. But that should go hand in hand with the development and expansion of adequate housing services. Services that will help secure the safety, health, and prosperity of our mobile Indigenous populations. One thing we know for certain is that time is of the essence.

Mateo Orrantia is a Research Analyst at NPI