March 25, 2019 - How can we, as Northern Ontarians, support female representation in municipal politics and leadership positions across our collective regions? It is increasingly recognized that having diverse perspectives in both politics and professional management settings is an asset. Diversity can enhance the decision making process, strengthen innovation, smash conventional and insular thinking, and allow for a range of new perspectives to shed light on what might otherwise go unnoticed. If we want to continue to support strong, resilient and forward thinking leadership in the North, then it is important to have structures and institutions that closely reflect the diversity and makeup of the North. 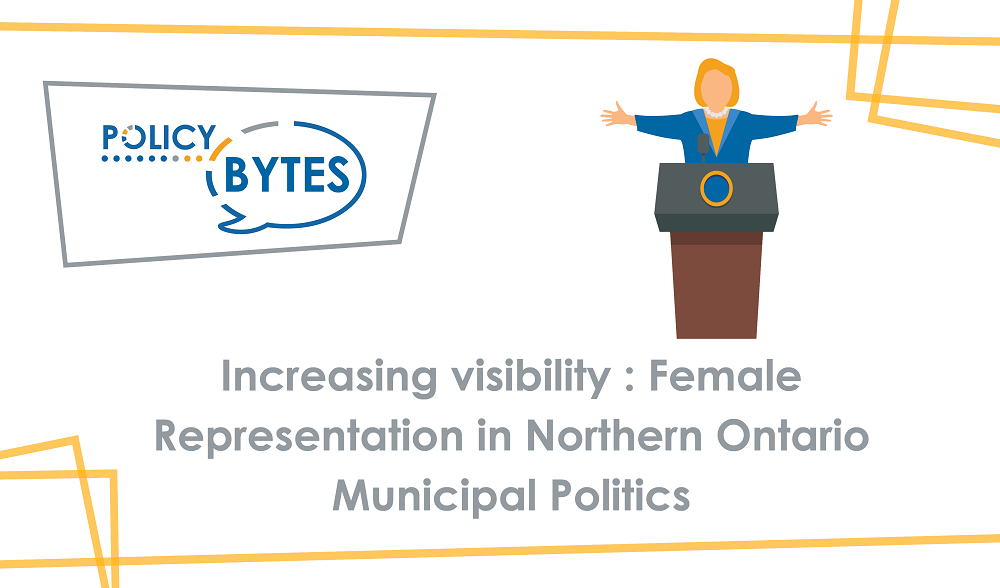 According to PoliticsNOW, a grassroots organization that aims for gender parity in municipalities throughout Northern Ontario, North Bay and Elliot Lake have never had a female mayor. In Sudbury, only two female mayors have served in the city’s history, and in the most recent municipal election, only one of the 11 mayoral candidates was a woman. In some areas the number of women elected to council in the 2018 election dropped; Elliot Lake went from an almost equally represented council to having only one female councilor, while Greater Sudbury's city council decreased from 30 to 15 percent (2010 and 2018, respectively for Greater Sudbury).

How does Northern Ontario municipalities compare in terms of women on city councils? Currently, out of the 85 available city positions across the nine cities profiled below, women hold 18 of these seats or 21 percent. 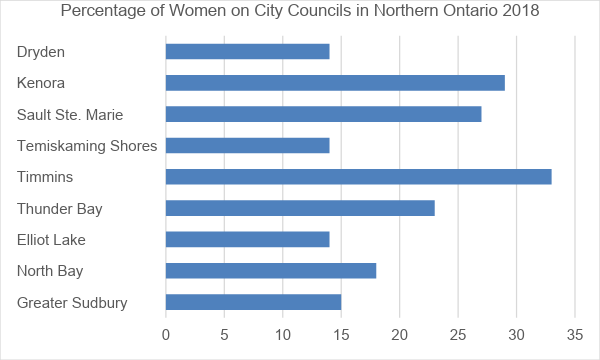 While female municipal representation in politics is growing, it has not yet reached a level of gender parity. Since 2014, the number of female candidates in Ontario that have run municipally has only risen from 23 to 27 percent. Rural Ontario Institute’s Municipal Councilor Profile similarly reports that 75 percent of mayors and councilors in rural Ontario are men.

There is some exciting news though; for the first time in the Ontario 2018 provincial election, two rural communities, the Town of Spanish and Algonquin Highlands have elected all-female city councils. This is believed to be the first time in Ontario history to have occurred.

One of the key factors that can encourage or discourage women’s participation in politics is what is known as the ‘political opportunity structure’. Simply put, having strong female role models and support structures in place will encourage more women to get involved in domains which often are dominated by males. On average, women have to be asked 11 times to run, because they are often balancing childcare, eldercare and income. The Honourable Patty Hajdu, the MP local to Thunder Bay decided to run after a colleague encouraged her to do so. She states that women often have more inhibitions and underestimate their qualifications.

In Northern Ontario, grassroots organizations, local businesses and government leaders can all play an important part in supporting more female representation in politics.

City councils, for example can adopt gender equity strategies that require using an intersectional lens to address gender issues from housing, violence against women, childcare, poverty, as well as political empowerment and leadership. In Vancouver the collective mobilization of Women Transforming Cities and Hot Pink Paper, created an accountability mechanism: the 2018 Hot Pink Paper (HPP) Campaign. This campaign outlined 11 recommendations that all candidates and parties were urged to incorporate in their platforms for Vancouver’s municipal election; ensuring women’s issues are centered in politics and that Vancouver is a women-friendly city. It is certainly an initiative that could be replicated in other Canadian cities.

Grassroots and civic organizations such as PoliticsNow, which not only reports on female representation in municipal politics, but also hosts speaker series across the North for women to gain inspiration from one another, go a long way in creating the kind of political opportunity structures and mobilization support for women. Additionally, groups like Thunder Bay’s PARO Centre for Women’s Enterprise recently received $350,000 in federal funding to increase women elected in government and have partnered with Women in Politics “to increase women’s representation in political leadership at all levels of government and school boards in Northwestern Ontario.”

According to the 2016 census, women comprise a little more than half the population in Northern Ontario. In order to build a more representative and gender inclusive decision making and institutional structure in Northern Ontario politics, it is important to address the roots of challenges that inhibit more women participating in these systems. Power only shifts when there are shifts within the system. By addressing workplace segregation, pay inequality and significant obstacles such as affordable childcare, meeting campaign financial requirements, as well as providing opportunities to gain social capital, networks, mentorship opportunities and leadership training, women can be a part of politics.

Caitlin McAuliffe was an Experience North student summer placement with NPI for the summer of 2018.