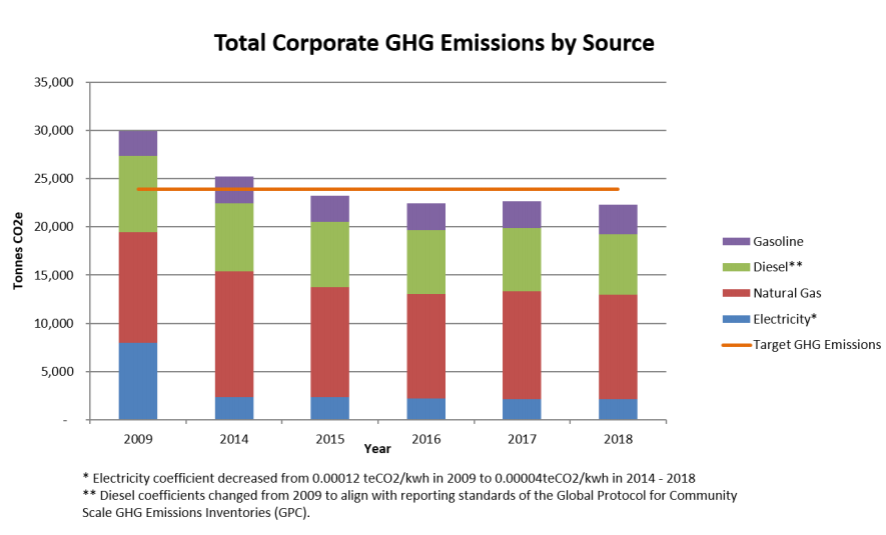 Thunder Bay’s climate goals are in line with goals set at the national level. Canada’s climate plan highlights the importance of leaving a habitable planet for future generations by investing in the environment today (Canada, 2019). For example, investments should be put into renewable energy sources and public transit in order to phase out electricity generated from coal (Canada, 2019).

The impact of climate change is being felt in the Great Lakes basin and this has greatly affected Thunder Bay. According to research, “Lake Superior has been recognized as one of the most rapidly warming lakes in the world as summer lake surface temperatures have risen 2.5°C between 1979 and 2006” (Thunder Bay, 2015). Thunder Bay has been proactive in addressing climate change, and continues to invest in green projects that generate clean energy. Three distinct green projects undertaken in Thunder Bay are showcased below.

Hatch’s solar projects in Thunder Bay made use of unused space to develop a system that will generate green and renewable energy for the coming 20 years (Hatch, n.d). The project involved covering six municipal rooftops with solar power generating installations beginning in 2012 (Hatch, n.d). The empty space which totaled 83,000 ft² now generates 685 kW of power (Hatch, n.d). In bringing the project to life, certain challenges specific to the environment in Thunder Bay needed to be addressed such as taking into consideration the northern location of the project when considering panel arrangement for maximizing power output (Hatch, n.d). Additionally, designing the panels in such a manner that took into consideration the winters in Thunder Bay and factoring in snow removal (Hatch, n.d). Overcoming these challenges and others, Hatch installed solar panels that were able to generate approximately 394 megawatt hours of electricity annually which can power roughly 36 homes (Hatch, n.d).

Synergy North developed a renewable energy project from leased land in the City of Thunder Bay to generate 3.2 megawatts of power from local landfill gas (Synergy North, n.d). The project entails employing a section of the Solid Waste and Recycling Facility in which methane gas is present and using it to fuel two engine-driven generators that produce enough electricity to power roughly 2,000 houses (Synergy North, n.d). The beauty of this project is that this is not only greener energy being generated but there is also roughly 263 million cubic feet of methane gas being converted into energy rather than being released into the environment and adding to GHG emissions (Synergy North, n.d).

Ontario Power Generation (OPG) and the Kiashke Zaaging Anishinaabek also known as Gull Bay First Nation, worked together to construct a micro grid that will reduce the community’s dependence on diesel (OPG, 2019). This micro grid project is the “first fully integrated solar and storage micro grid built on-reserve” (OPG, 2019). It is estimated the new technology will help to reduce diesel usage by approximately 130,000 liters, which in reference is about 30 per cent of the community’s current consumption (OPG, 2019). This project will help eliminate 400 tons of carbon emissions annually by investing in a greener source of energy generation. The micro grid became active in 2019 but is a “long-term energy supply solution that is both reliable and environmentally sustainable” (OPG, 2019).

Renewable energy sources and reducing GHG emissions are the way to the future and Thunder Bay is playing its role. The projects mentioned are just some of the initiatives being undertaken – there are also efforts being initiated by others. In the 2016 census, 27 farms reported having solar panels and one farm reported having wind turbines as a renewable energy producing system in the Thunder Bay census district (Statistics Canada, 2016). Additionally, the City of Thunder Bay is currently in the process of creating a Community Energy and Emissions Plan (CEEP), for which the community engagement process will be completed by 2021 (Thunder Bay, n.d). The community plan will focus on Thunder Bay moving away from being a fossil-fuel dependent city. And every step counts.

Statistics Canada. 2016. “Farms reporting having renewable energy producing systems in the year prior to the census.” Government of Canada. Retrieved from https://www150.statcan.gc.ca/t1/tbl1/en/cv.action?pid=3210044901

Amanjit is a Research Analyst at NPI.