May 1, 2019 - This blog first appeared in the May edition of The Walleye 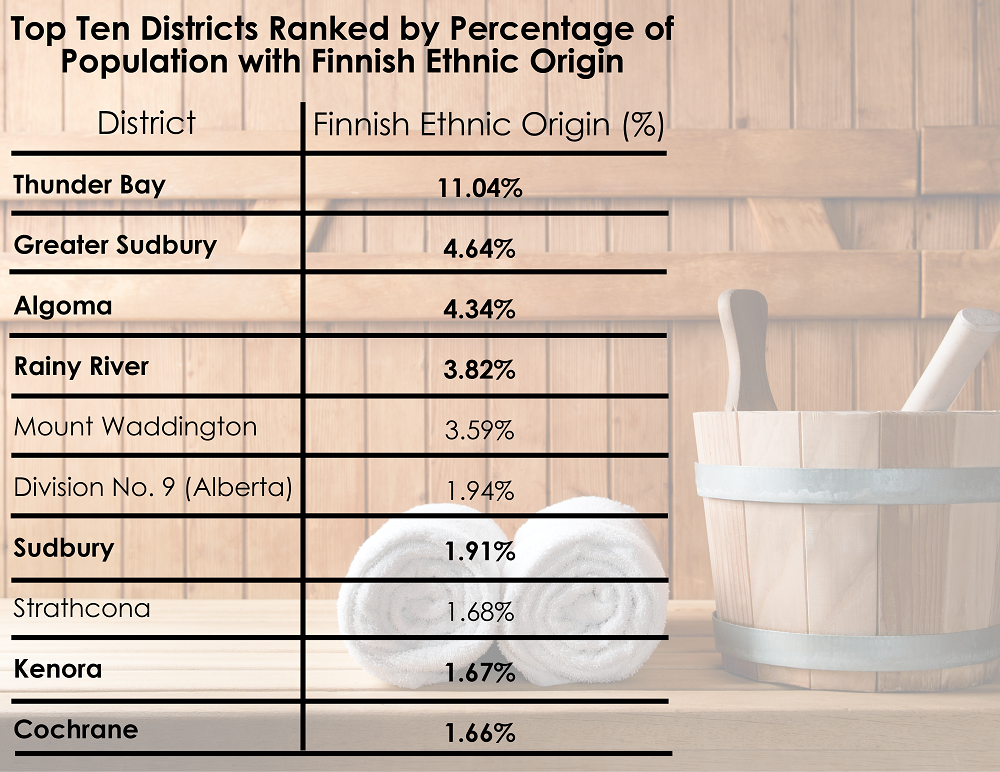 As this month’s cover issue takes a look at saunas, NPI has put together some statistics on the Finnish population and language in Thunder Bay. As many may know, there is a high proportion of people with Finnish ethnic origin in the Thunder Bay District, 11.04% according to the 2016 Census. As a matter of fact, the Thunder Bay District represents the highest proportion of people with Finnish Ethnic Origin in all of Canada, with Greater Sudbury and Algoma districts trailing in second and third place. Figure 1 shows that among the top ten districts ranked by percentage of population reporting Finnish ethnic origin, Northern Ontario encompasses 7 out of the 10 districts, and Northern Ontario alone makes up 23 percent of the total population with Finnish origin in Canada. In addition to having the highest proportion of people with Finnish Ethnic Origin, Thunder Bay District also has the highest nominal number in Canada at 15,785, compared to the Greater Vancouver district in second place at 14,085, Toronto district at 8,160, and Greater Sudbury at 7,375. 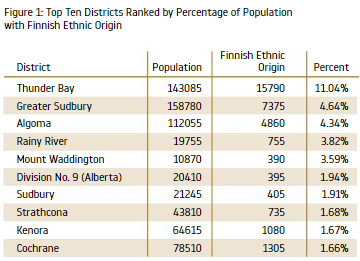 Finally, Figure 3 examines which Ontario cities have the highest number of those with Finnish ethnic origin with first generation status. We can see that in 2016, 990 of those with Finnish Ethnic Origin in the City of Thunder Bay reported that they were “first generation” which is defined as “persons who were born outside Canada… people who are now, or once were, immigrants to Canada.” (Statistics Canada, 2016). 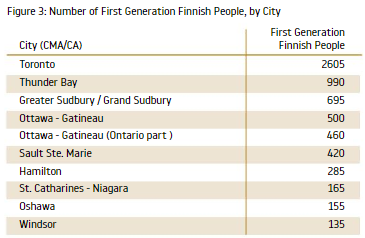 The data demonstrates that Northern Ontario has strong ties to the Finnish community, and that Thunder Bay and Greater Sudbury appear to have done a great job in the past at attracting first generation Finnish immigrants to Canada. Continuing to do so, while targeting working-age Finnish immigrants could have the potential to both curb the effects of the ageing Finnish community in the district, as well as support Northern Ontario’s immigration efforts.

Alex Ross is the Senior Data Analyst at NPI.