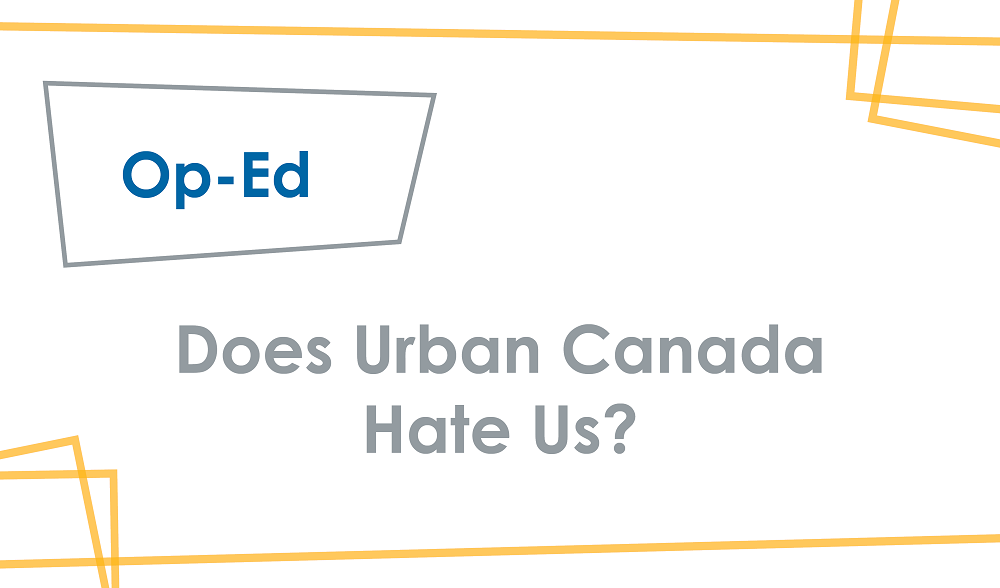 The urban-rural divide is deeper than ever in Canada. My question is simple; why is this? Do “they” (urban dwellers) hate “us” (rural and small-town Canadians)?

I think the question needs to be posed in this way due to the venom that is being directed at rural communities, especially those involved in natural resource extraction. Reading national headlines, and, yes, social media, one can find very little sincere interest in understanding why rural Canada is gravely concerned. This has been the case for some time and is getting worse, not better.

Albertans are depicted as knuckle dragging red necks tied to a dying industry and determined to sacrifice the health of the planet on the altar of profit, and bigger cowboy hats. The people of northern Ontario are described as having their hands perpetually out while scarring the earth and clearcutting the forests. Atlantic Canadians, while considered romantic and friendly, are seen as people living in places to be visited for nostalgia alone. Urbanites can then marvel at the progress to be found in the advanced cites, as opposed to the backwards country.

These are broad stroke caricatures and yes, there are lots of urban dwellers in the regions I just described, but the issue remains. There is a decided tone of moral superiority among urban based policy makers around the types of lives and the kinds of people normally found in rural communities.

The message I take away from many encounters is “if you were only smart enough to understand how great living in a city is, you would be here in a heartbeat”. This is often promptly followed with, “and if you insist on living out there in the boonies, you get what you deserve if you can’t call the police, or get health care, or access education.”

I readily admit that, as an Atlantic Canadian, when someone tells me “if you don’t like it, just move” I react badly. As a Thunder Bay-ite, my position remains unchanged. As a policy expert, knowing as I do how Sweden made the conscious decision to deliver the same quality of service everywhere in their country, I have no time for arguments that it can’t be done or that it would be “too expensive”.

I also admit that the more vocal advocates of rural life and living have tended to be…uncompromising. Ezra Levant and his concept of ethical oil come to mind. Levant’s basic premise is objectively true. Canada is remarkably more free, ethical, and environmentally aware than many other oil producing nations. Levant’s ‘take no prisoners’ approach, however, does little to win over the folks in the mushy middle to the natural resource cause. While those committed to the end of natural resource extraction see no difference between oil from Alberta and oil from Saudi Arabia. It is, to borrow Levant’s label, all “blood oil” to them.

Yet, there are objective facts to prove both sides in this exchange of insults to be wrong. Natural resource extraction in Canada, be it oil, trees or minerals, is highly regulated, environmentally responsible and in many cases globally leading from a sustainability perspective. The gig economy is alive and well beyond the boundaries of Vancouver and Toronto, especially in the Atlantic region. Highly educated, well mannered, Prius-driving hipsters can be found in communities throughout northern Ontario.

At the same time, provincial and federal policy makers have not, entirely, abandoned communities beyond the 416 and 905 area codes. The federal Rural and Northern Immigration Pilot being a recent example. The creation of a federal Minister for Rural Economic Development being another.

So, where to from here? For that, I turn for inspiration to the last great unity crisis in this country. The 1995 Quebec referendum. We resolved that crisis when Canadians from outside Quebec did two things. First, we proved with public events and private messages that we truly valued Quebecers. Second, we made concrete policy changes that recognized the unique nature of Quebec society and freed them from the unintended consequences of policy designed for a different reality.

If we are serious about bridging the urban-rural divide, those are two good places for urban Canada, and urban oriented government, to start.