January 29, 2018 - It’s no secret that food costs rise the further north you go - just ask community members living in Northern Ontario’s rural and remote First Nations. However, there may be a solution that warrants further discussion: drone technology. 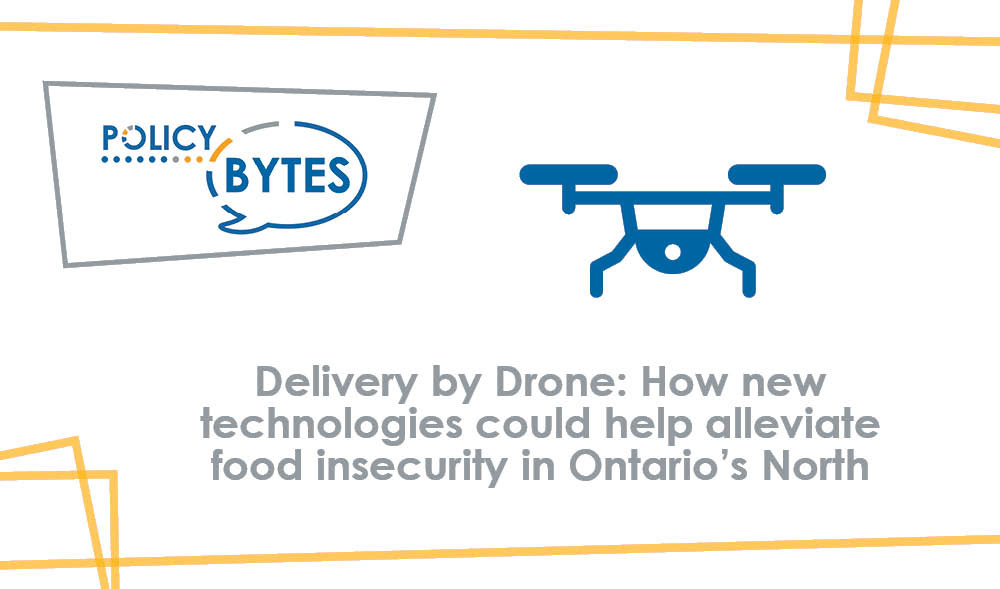 Before diving into the potential use of drones, it is important to understand the extent of food insecurity in Ontario’s northern First Nation communities. According to a 2016 report by Food Secure Canada that analyzed food costs in the communities of Attawapiskat, Fort Albany, and Moose Factory, staggering differences between remote communities versus connected ones were found. For example, in 2015 the average cost of the Revised Northern Food Basket (RFNB) for the aforementioned communities was $1,793.40 per family, compared to $874.90 in Thunder Bay and $847.16 in Toronto. On top of this, Canada’s Food Price Report 2017 noted that Canadians can expect an increase in food cost at a rate higher than inflation (expected increase of 3 to 5 per cent), therefore compounding on already high food costs in Ontario’s northern First Nations. 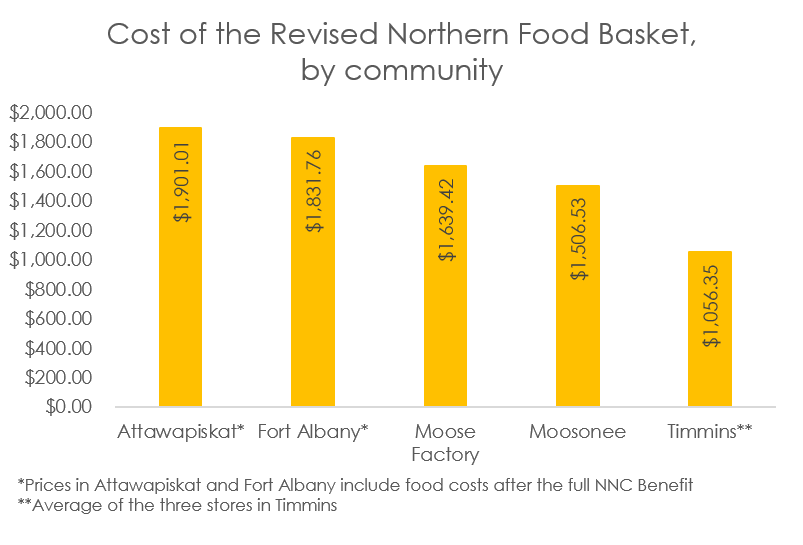 Source: Martin et al. “Paying for Nutrition: A Report on Food Costing in the North,” (2016)

Food Secure Canada’s 2016 report also found that households in Fort Albany (no current data exists for Attawapiskat and Moose Factory) would need to spend approximately 56 per cent of their median income in order to purchase nutritious food. Comparatively, it is 36 per cent in Moosonee and 19 per cent in Timmins.

And it doesn’t stop there. The Council of Canadian Academies (CCA) released a report outlining the impact of food insecurity with evidence indicating that food insecure people were more likely to face malnutrition, infection, chronic health problems, obesity, cardiovascular disease, stress, and child developmental issues. Furthermore, the CCA report found that in addition to a negative impact on well-being, there would be increasing economic costs for handling what the CCA refers to as an “emerging public health crisis”.

Given the problems food insecurity causes, why do food costs remain high? According to the 2014 Auditor General Report, Nutrition North Canada (NNC) was ineffective in providing healthy food to the northerners it was supposed to benefit. The 2014 Report cited a lack of competition, poor transportation, and unreliable weather as reasons for increased food costs. Given certain barriers, many northern First Nation communities must rely on grocery stores that are often not locally owned and carry foods at much higher costs than in the southern communities of Ontario. Food Secure Canada’s Report states that this is due to small populations with low purchasing power, grocery monopolies (Northern), higher transportation and fuel costs, and complex food distribution systems with longer and less frequently traveled transportation routes.

To illustrate this issue, we can look to Moose Cree First Nation (Moose Factory), a small community located 850 kilometres north of Toronto and 250 kilometres north of the nearest highway. While Moose Factory has no road access, there are some travel options to reach the community, as outlined and provided by Moose Factory. First, one must first travel to Moosonee, which they can do so by a train from Cochrane or fly by AirCreebec from Timmins. From Moosonee, a boat-taxi can be taken for a one-way fare of $15 in the summer, the ice road from December to March with a one-way taxi charge of $10, or a helicopter during freeze and break-up seasons at a one-way cost of $40 per person.

This is where drone technology has an increasing capability to provide a cost-effective and immediate solution to a drawn-out problem. Recently, Drone Delivery Canada has announced a partnership with Moose Factory to test a commercial depot-depot drone program. The goods shipped will include mail, medical supplies, and other needed goods. Boats, water taxis, and helicopters are slow and expensive means of transportation, driving up food costs whereas drones can be cost-effective and immediate. As Moose Factory’s Director of Economic Development Stan Kapashesit states, “it can take upwards of hours to get goods, even in an emergency, to be transported.”

Goods being distributed to the community can cost $7-$10 per pound when travelling by helicopter versus the “pennies or dollars” if they were to come by drone, making the cost-benefit analysis of the technology substantial. The program in Moose Factory will begin with drones that are 1.2 metres by 1.2 metres with a capacity of 4.5 kilograms and a flight time of ten minutes from Moosonee. Should the project be successful, Drone Delivery Canada will then bring in larger drones able to transport heavier loads and fly longer distances. Thus far, the drones have demonstrated an ability to withstand the harsh conditions of the north following test flights in the community.

In short, food insecurity is an issue faced by many of Northern Ontario’s First Nations, with transportation costs driving up food costs in the remote communities. Drone technology is one solution to help change this situation by reducing costs and providing an immediacy that is currently lacking for so many. As Moose Cree First Nation Chief Patricia Faries states, “we (First Nations), are not static, or stuck in 1905, we are an evolving nation just as anyone else.” And drone technologies can be a part of that change.