November 26, 2018 - The science of climate change has moved from theory to fact. Next step is reality. Even with global best-efforts to reduce carbon emissions, temperatures are expected to rise for at least 25 years and storms will grow in intensity. What could these projections mean for the economy of Northern Ontario and its transportation system? This piece is the first in a series of articles that address scenarios that could play out by 2050. 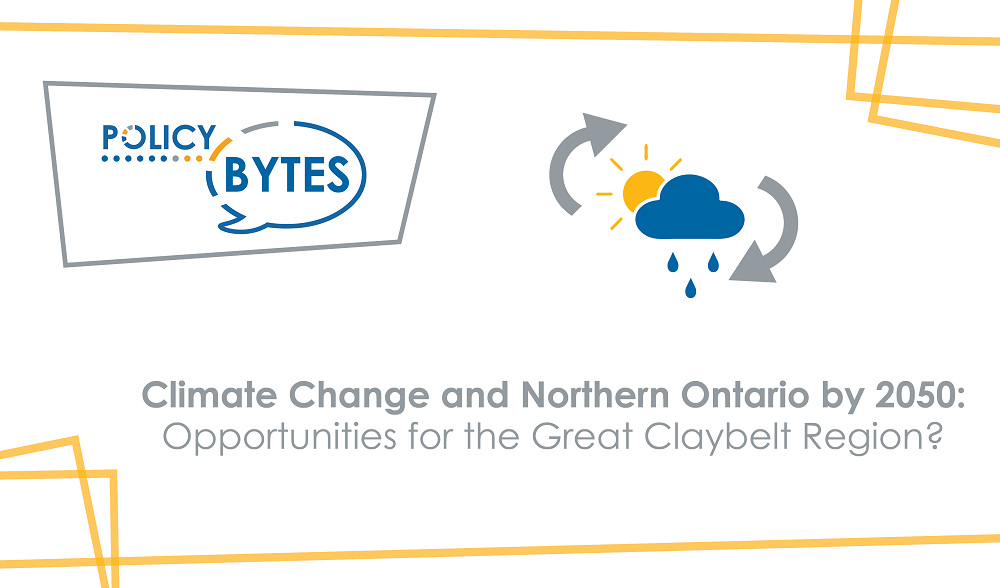 As climate change continues, demands for solutions grow. For Northern Ontario, opportunity manifests as the 180,000 sq. km. area known as the Great Clay Belt. This ancient glacial lake bottom encompasses the Ontario census areas of Cochrane, Timiskaming, and Abitibi County in Quebec. Out of 29 million acres of potential arable land, roughly 250,000 acres are farmed today. Despite fertile soils, cold temperatures and poor drainage, not to mention the “curse” of blackflies and mosquitos, impeded settlement.

The Ontario Climate and Agriculture Assessment Framework (June 2017) paints a much warmer future for the Clay Belt over the next 30 years. Growing Degree Days (GDD) are predicted to increase from 1370 per year on average, to 1925 per year by the 2050s. This means that future growing conditions in the Clay Belt could be better than in Eastern Ontario or Manitoba, today. The combination of longer growing seasons in the Clay Belt and higher land prices in Southern Ontario has already prompted renewed interest in the area.

With an arable land base one and a half times the cropland area of Manitoba, it is possible to surmise that the Clay Belt could support a similar population and economy. Not only might the Clay Belt become more productive, but with less ice on James Bay and a longer growing season, the commercial forestry boundary could shift farther north into the Hudson Bay Lowlands, too.

Could a million people relocate to the Clay Belt by 2050? If climate change is sufficient to grow corn in the Clay Belt, areas farther south are also likely to look less desirable. In particular, coastal areas may see forced relocation. A northern migration stimulated by eco-refugees is not hard to imagine.

Rising food demand could also make the Clay Belt a significant and needed agricultural area. Even the median estimates have the world adding one billion more people to feed every 20 years to 2050. At the same time, some existing food production areas are likely to decline. Rising oceans will flood highly productive delta areas in Bangladesh and Egypt, while increasing temperatures will extend the deserts. Parts of a populated area stretching from the Middle East to India will experience temperatures above 50°C. Such temperatures make human habitation and agriculture unbearable.

An increase in grain production in the Clay Belt would require long haul rail service to reach export ports. Fortunately, much of the rail infrastructure built by the Grand Trunk Pacific Railway still remains in service or could be expanded on existing rights-of-way. This area is also served by Highway 11, which is a well-served truck route. Feeder road infrastructure to access Clay Belt farms and grain handling facilities will follow demand. For parts of the Clay Belt that are not suitable for crops, livestock could be supported. Whether or not beef production could support an abattoir, there most certainly would be an increase of trucking.

Additionally, existing communities from New Liskeard to Hearst are likely to expand. It is difficult to identify which city will dominate the region, but Timmins certainly has a head-start. With greater population, highway improvements and better air connections are likely to follow. Perhaps the most fundamental change though, is political. Prosperity and population in the Clay Belt will pull the economic centre of balance much farther north. Areas lying between the agricultural areas of the Clay Belt and Southern Ontario will also gain population and transport connections because a rising tide lifts all boats.

Clearly, the impact of climate change is going to have a negative impact on many parts of the world. Rising ocean levels, more violent hurricanes, expanding deserts and hotter average temperatures all portend dangers for large parts of the world. Growing population trends may be adjusted down by food shortages and harsher environments. But it is an ill wind that blows no one any good.

Northern Ontario has always had a cold climate that limited agriculture in the Great Clay Belt. However, this location may be one of the big winners because of climate change by 2050. The basic transportation infrastructure is in place to capitalize on this growth, but it is not too soon to begin planning for the day that one million people want to move here. Success always brings new challenges.