October 17, 2019 - As the Federal political parties count down to the October election, they must have policy positions that speak to all national issues. Access to transportation is important to Canadians everywhere. It would be valuable to learn the leaders’ positions on transportation access to the remote northern communities, and whether or not, they have formed an opinion on the use of cargo airships to provide year-round freight transport. 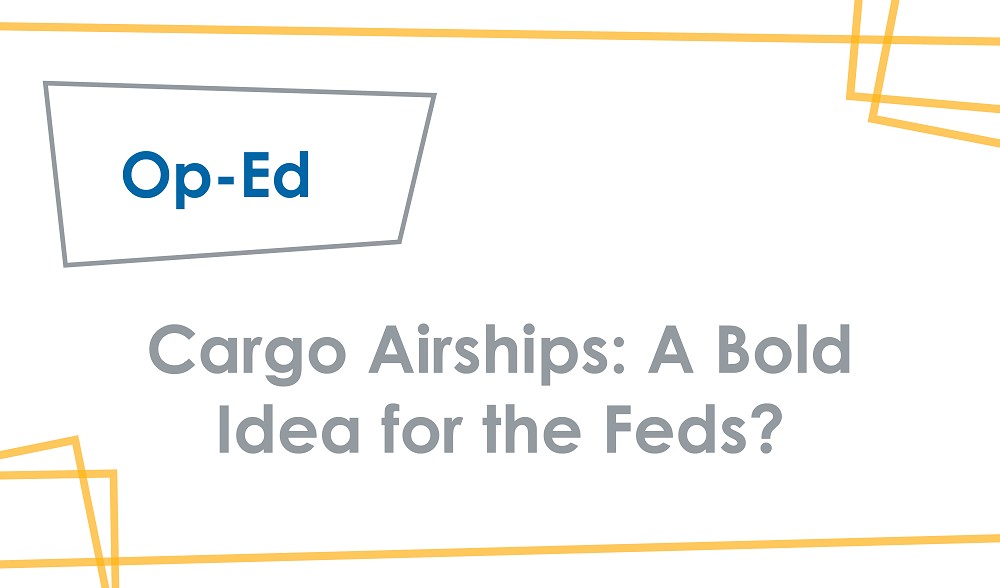 The consequences of climate change and the economic living conditions in remote communities were highlighted internationally when the railway line to the Port of Churchill washed out. Almost immediately, the cost of food skyrocketed 200 per cent or more, construction projects had to be suspended and unemployment soared. The shockwave knocked the local economy to its knees and forced many residents to leave the community. When the railway link was finally restored, the people of Churchill rejoiced the end of their isolation, and the return to the mainstream world economy.

As much as all Canadians were pleased to see Churchill’s economy restored, some 292 other remote communities in Northern Canada continue to live permanently with such deprivation, and even worse circumstances. Chronic unemployment, rampant diabetes, boiled water advisories, crowded housing, tuberculosis, food insecurity and, sadly, suicide still characterize too many remote communities. Despite spending billions of dollars and promising change, little progress is apparent. The reason is simple: nothing has been done to make the remote communities, less remote.

Without year-round freight transport, the cost of repairing or building new homes in the remote communities is very expensive. Annually, the federal government spends over $300 million to support the housing needs of First Nations on reserves, but it is continually falling behind. Approximately 2,000 houses are built on reserves each year, which is roughly a 2 per cent increase, while the Indigenous population is growing four times faster than the general Canadian population. In 2015, the Government of Canada estimated the Northern housing gap at 35,000 to 40,000 homes.

According to a recent CMHC report, 51 per cent of all housing in remote Manitoba communities is classified as inadequate or unsuitable. The same statistic likely applies next door in Northwestern Ontario. Many houses have people sleeping in their living rooms. In these overcrowded conditions, with poor ventilation, the air can become contaminated with toxic moulds that create respiratory diseases. Such houses continue to be occupied however, because there is no alternative. Many people in the remote communities are just one step away from homelessness.

Bad housing conditions contribute to a host of negative health, education and social outcomes. Perry Bellegarde, National Chief of the Assembly of First Nations, summed up the consequences before the Senate Standing Committee on Aboriginal Peoples: “Overcrowding and inadequate housing means the spread of communicable diseases and other negative impacts on health. It means the lack of space for children to play and study. It means the increased family tension that overcrowding creates and the lack of safe alternatives for family members if they fear violence” (Housing on First Nation Reserves: Challenges and Successes).

Year-round construction supported by cargo airships would go a long way towards building more, higher-quality housing. Construction materials delivered as needed would avoid loss and damage. With annual employment, local people could acquire skilled trade certifications and be able to maintain the housing stock in a timely manner.

Private sector companies are investing in modern airship designs, but one company, Flying Whales, received direct investments by the Governments of France and China. At the Paris Airshow (June 2019), Flying Whales announced an accord with the Government of Quebec to invest in a branch plant in Montreal. This is a hopeful sign. No transportation networks have ever emerged without strong public support and encouragement. Private money follows public money.

Maybe Quebec leaders see something that the Ontario and federal politicians cannot. Certainly, Northern Ontarians would like to have well-paid aerospace jobs building airships, too. But the greatest economic gain would be felt in the remote communities that could use cargo airships.

When asked, Provincial politicians always say that on-reserve housing is a Federal matter. Federal politicians point to the provinces to provide transportation access within their boundaries. Perhaps lost in this jurisdictional wrangling is that the people living in remote communities are still Canadians and deserve the same equity of access as all other citizens.

The temporary loss of the railway line to Churchill was just a climate change warning shot. The potential effects of warming temperatures on northern transportation are alarming. Winter road seasons continue to shrink and all-season roads can be turned into roller coasters by melting permafrost. If not cargo airships, then what transportation policy alternative do the political candidates offer to reduce economic disparities in the remote communities and to adapt to their changing environment?

The election day is arriving soon and the voters are waiting for bold ideas and leadership.

Dr. Barry E. Prentice is a member of the Research Advisory Board at the Northern Policy Institute.