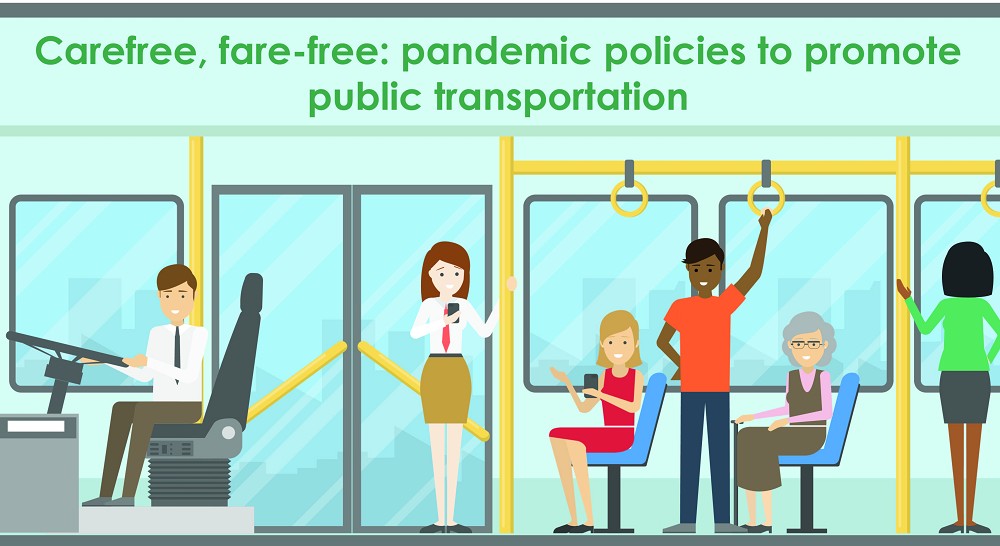 With the anniversary of the first lockdown recently passing, we can see how quickly and drastically we have adapted to some very different ways of living. Some changes we may be eager to do away with, but there have been some adjustments that allow us to question how we want to shape our post-COVID community. What kind of services and priorities would we like to see stick?

One area worth focusing on are changes that would support climate change reduction. The global drop in greenhouse gas (GHG) emissions has received a lot of attention – with a 17 per cent drop in emissions during the first wave of lockdowns around the world. With the City of Thunder Bay developing a strategy to become a net-zero carbon city by 2050, there may be some pandemic policy solutions we should consider for permanent changes.

One option worth discussing is revamping Thunder Bay public transit to provide a fare-free service. Originally launched earlier last year and wrapped up mid-summer 2020, fare-free transit has gained traction in Thunder Bay. Poverty Free Thunder Bay has campaigned that it is a step towards an equitable transport system in the city that could reduce our GHG emissions with more commuters opting to take public transit.

When taking a glance at those budget cuts fare-free transit may seem out of reach, but with the right tools it can be successfully managed. The town of Canmore, AB started funding fare-free transit through a paid parking initiative in 2018. Additionally, Canmore’s Integrated Parking Management Plan has decreased road and parking congestion by up to 30 per cent while increasing ridership on public transit. While considerably smaller in population compared to Thunder Bay, the option is nevertheless intriguing.

While transit hikes take a pause for 2021, it’s worth asking yourself what would get more commuters to the bus stop instead of the parking lot. The data tells us that 3.6 per cent of all commuters in Thunder Bay use public transportation to get to work, but 40.3 per cent of all commuters drive less than 5 kilometres to work every day. That is a big chunk of our community getting in their car for a quick trip. Could more accessible transit encourage those driving short trips to skip filling their tank and to hop on the bus? 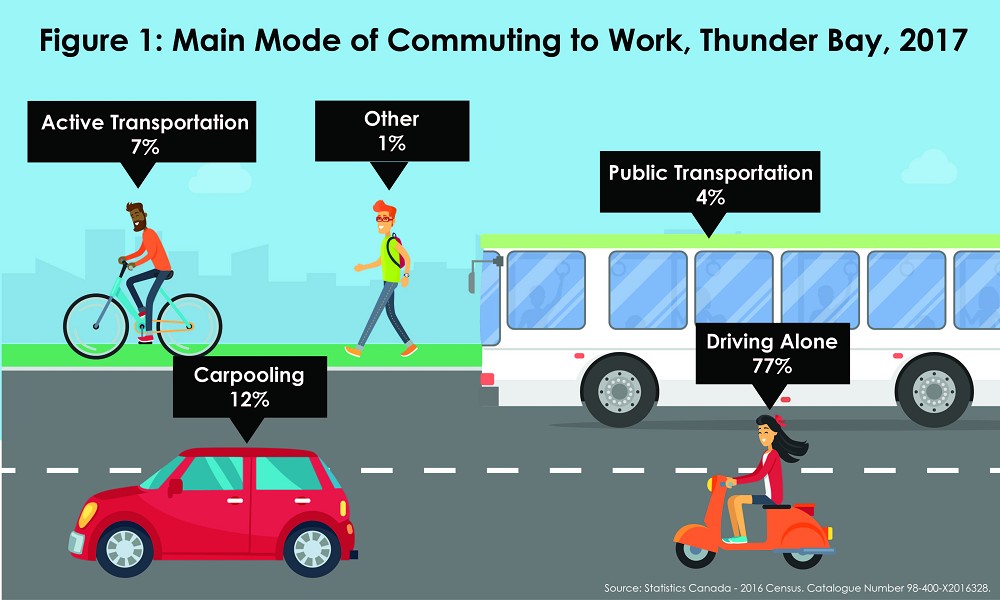 The City collected data throughout 2020 that will go into a draft of the Community Energy and Emissions Plan (CEEP) that will be up for public review in spring 2021. About a third (35 per cent) of survey respondents told the City that urban sprawl and the dominant car culture could make it hard for residents to reduce their reliance on fossil fuels. With such a large area to cover, it’s not realistic to expect a huge shift from car culture to making public transit trendy.

Nevertheless, engaging in conversations about our public transit infrastructure is worth having as it touches on important elements of growth for Thunder Bay. For example, fare-free transit could potentially help retain newcomers in Thunder Bay. Research shows that recent immigrants are much more likely to use public transit for their commute than Canadian-born residents, more so when they are new to Canada.[i] This affordable, accessible public transit is also a key indicator of a Welcoming Community. [ii] This means that fare-free transit (or something similar) could aid in retention and enhance the quality of life for Thunder Bayites while we collectively reduce our carbon footprint.

We will be waiting a bit longer to see what is being proposed in the CEEP draft, but it’s been previously stated that improving public and active transportation are on the table. If you have thoughts on fare-free transit in Thunder Bay, or other ways to encourage uptake on public transit use there is an online engagement tool that allows residents to pose any questions they have.

While we won’t be seeing fare-free transit piloted this year, there are still important conversations to be had around making community changes to reach carbon neutrality by 2050. Researchers acknowledge the drop in GHG emissions during the pandemic looks significant, but individual choices can’t save the world alone. It’s time to start taking transit seriously in Thunder Bay to preserve our community.