August 8, 2016 - There’s an old adage that states, “Don’t have a cow, man” or wait, that’s not the one I’m thinking of. Rather, I mean to repeat Mark Twain’s refrain, “Buy land, they’re not making any more of it.” While neither of these concepts are related in principle, inverting the ethos of Bart Simpson’s famous catchphrase and combining it with Twain’s words of wisdom may present a synergistic opportunity for Northern Ontario.

The provincial cattle herd is shrinking. According to Beef Farmers of Ontario (BFO), the Ontario cow inventory is down 33% from 2005 and beef production in the province is declining. How does Northern Ontario fit into all of this? Well for starters, what does our region have plenty of? Land. In fact, given the million acres of underutilized land at our disposal, some are suggesting that we should be targeting vacated lands in the Great Clay Belt in Northeastern Ontario in order to increase the provincial cattle herd and stimulate economic growth. The BFO contends that adding 100,000 animals to the provincial inventory over the next ten years is not only feasible, but will add more than 4,500 jobs and $318 million in value added GDP per year.

On paper that sounds great, but hold on. Agriculture, particularly the cattle industry, produces large amounts of methane (CH4), a significant cause of human-related greenhouse gas emissions. Cows produce methane as part of their normal digestive process, but CH4 is also emitted as part of manure storage. In addition, the United Nation’s Intergovernmental Panel on Climate Change (IPCC) recently released a report stressing that changes in behaviour, such as eating less meat, could help mitigate worldwide emissions. As a result, is adding, and potentially eating, thousands of cattle in Northern Ontario a prudent idea as we continue to reach crisis levels with global warming?

While scientists are actually working on ways to reduce CH4 natural emissions from cattle, both chemically and organically, there is still the issue of carbon sequestration if we start clearing thousands of hectares of land to make way for pasture in Northern Ontario. Our forests can act as “carbon sinks” absorbing greenhouse emissions, so if you cut down some of these trees you limit your ability to sequester carbon, right? Not necessarily. A study from 2001 had found that grasslands may also possess similar carbon storage properties. Well, not the grass itself, but rather, the soil underneath has the ability to capture carbon dioxide. More recent studies point in the same direction, but more work still needs to be done to determine how much carbon can actually be locked up in soil. Other organizations such as the World Wildlife Fund, in reference to the Northern Great Plains, have noted that the grasslands managed by ranchers helps support ecosystem biodiversity and wildlife habitat.

For now, Northeastern Ontario is home to 700,000 acres of farmed land, which represents $190M in agricultural farm cash receipts. The Ontario Ministry of Agriculture, Food and Rural Affairs estimates that “most districts in Northern Ontario can increase active agricultural lands from 20 to 50% by drawing idled private lands back into use.” This is especially true for the Timiskaming and Cochrane Districts, which sit on the Great Clay Belt, a 16 million acre area, which is double the size of all cropland currently being farmed in the province.

Expanding the cattle herd could be a boon for the agricultural industry in the Northeast, but there is also much potential for the Northwest. In fact, in 2011, the Rainy River District had the most cattle and calves in the region, accounting for nearly a quarter of all bovine in Northern Ontario (see chart below). As a result, expansion could benefit districts in the Northwest, particularly those that are not currently agriculturally diverse, such as Kenora. 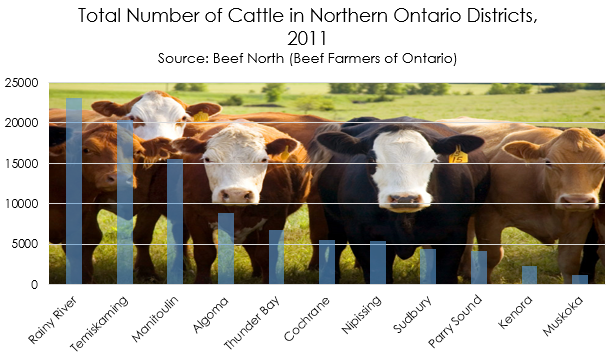 It’s clear that expanding the provincial cattle herd into Northern Ontario could represent an enormous opportunity for the region, but there are other factors at stake. While forecasts of money and jobs are always exciting talking points, we also have a broader responsibility that includes assuring that we do not initiate activities that increase agricultural emissions and exacerbate global warming.

Moving forward, the land is not going anywhere, but we need to invest in more research and investigation. While this may have some wondering “where’s the beef,” expanding the cattle herd in Northern Ontario is something that we can’t afford to be wrong on.