January 22, 2018 - A stand-alone English university for Timmins? Maybe not. This would be a fair summary of a recent report published by Northern Policy Institute into one suggestion for expanding post-secondary access in Northern Ontario. 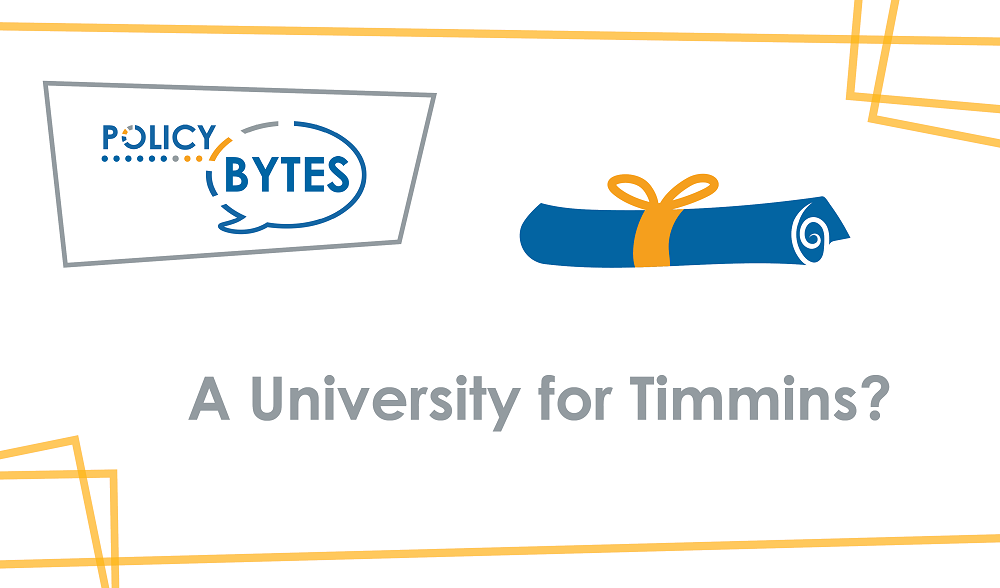 The author, Dr. Ken Coates, concludes that while there may not be a strong case for a new post-secondary institution in Ontario’s Northeast, other options are worthy of consideration. These include developing a satellite campus of an existing university, developing an expanded, coordinated Northern College-University partnership and considering alternative approaches to traditional university programming such as an Indigenous institution for Ontario or a work-focused institution for the province (polytechnic anyone?).

Full disclosure, this paper was partially supported by a contribution from the Timmins Economic Development Corporation (TEDC). The Timmins Economic Development Corporation approached NPI with a simple question: Would it be possible for Timmins and Northeast Ontario to support an English-language university, adding to the three existing universities in the region?

Unlike a consultant, NPI could not guarantee the answer would be “yes”. Timmins EDC knew going in that the answer to their question may well be “no”, yet they also understood that even an evidence based “no” would be of value to the community in making decisions about allocating scarce community resources. NPI wants to applaud the TEDC for having the courage to take us up on our standing offer to explore important northern issues in partnership with local institutions provided the author is free to go where the evidence leads them.

Make no mistake, however, access to post-secondary is an issue NPI hears about regularly. Particularly when it comes to the question of access to university courses and the breadth of choice available here in northern Ontario versus elsewhere. In A University for Timmins? Possibilities and Realities Coates outlines how many other countries deliver much higher levels of access and choice in their northern areas.

That more programs and closer proximity is an issue for local communities is not a surprise. The literature on post-secondary education regularly demonstrates that PROXIMITY to a post-secondary institution is a huge factor in whether people attend post-secondary. Similarly, we routinely see that students who otherwise might attend university choose college instead where no university option is within physical reach of their home.

As Coates highlighted, Timmins is right to give serious consideration to the idea of a free-standing institution or a satellite campus — most communities of comparable size in Canada have a significant university presence. That said, the North has been quite well-served by its existing universities and colleges. The province is already funding four northern universities: Lakehead University, Algoma University, Laurentian University (including its French-language affiliate, Université de Hearst, based in Timmins), and Nipissing University, as well as six community colleges (Boreal, Cambrian, Canadore, Confederation, Northern, and Sault).

In the current political environment, opening a new university, in Timmins or any other northern community, has to be tied to the educational needs and employment possibilities of the future. The demographic and educational data in Northeastern Ontario and the Timmins area do not point to the need for an expansion of the university system. Furthermore, the immediate prospects for a new institution are not promising. The political, enrolment, workforce, and other arguments for a Timmins-based institution do not align well with provincial fiscal realities and priorities or with Ontario’s post-secondary needs.

Globally, however, a series of northern universities have opened in the past half-century or so. Only a few of them were based on the standard justifications of unmet demand and potential enrolment. The vast majority of these universities — including such substantial institutions as the University of Tromsø and the University of Alaska Fairbanks — were established for largely symbolic purposes, with governments believing that a research and teaching institution could underpin community and regional development.

Algoma University and the City of Timmins have now begun preliminary discussions about the possibility of developing a satellite campus in collaboration with Northern College. Coates’ analysis makes clear that all sides in these discussions need to understand that a great deal more work is required to bring any such initiative to fruition, and they should act accordingly.