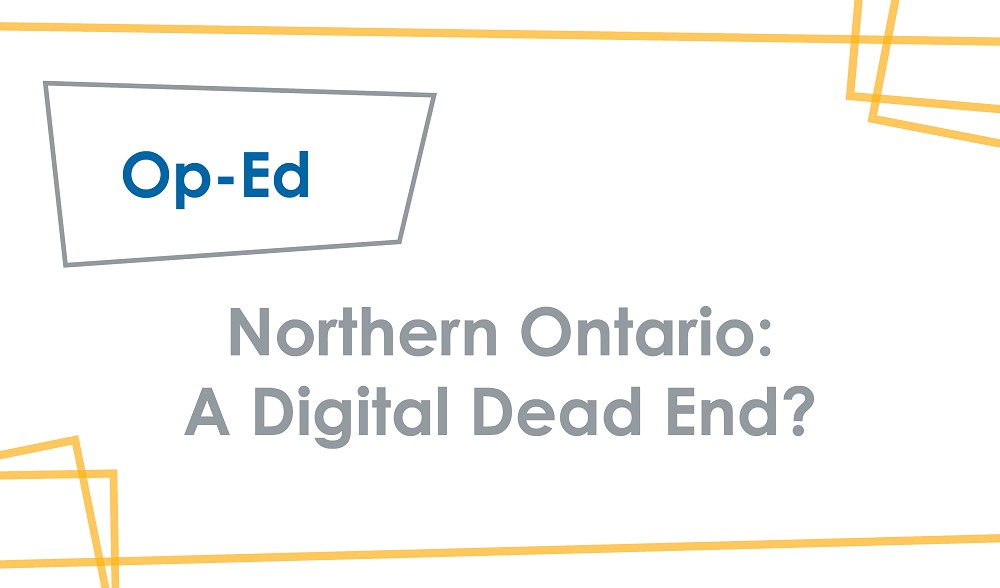 Sometimes I find myself thinking of a map of Northern Ontario and seeing this huge foot coming down out of the sky crushing everything beneath it while the words “now for something completely different” boom across the heavens. For those of you not familiar with Monty Python’s Flying Circus, I would encourage a few minutes on Google just to get a feel for the context. That assumes, of course, that you have reliable internet and can access Google. In Ontario’s north, that isn’t necessarily a sure thing.

The Canadian Radio-television and Telecommunications Commission (CRTC) has a very nice map online showing “broadband internet service coverage in Canada in 2014”. It has all sorts of colours on it – purple for cable, blue for fibre, green for fixed wireless, and yellow for LTE or “fourth generation” cellular technology. Virtually all of Northern Ontario is white…as in no service at all. Of course, large swaths of Northern Ontario are also sparsely populated. That said, even in northern urban hubs the predominant colour is green with lots of purple to be found. And don’t get me started about smaller population centres or the lack of cell coverage 15 minutes outside any major community.

Which brings me back to that heavenly foot “rebooting” (as it were) the Northern economy. If we are serious about securing a sustainable future for Ontario’s northern regions in the modern digital age, then it is, literally, time for something completely different.  Even traditional industries like mining and forestry are becoming more and more information technology dependant. If remote machinery, digital mapping, electronic claim filing or just your smart phone (or even your 20 year old flip phone) doesn’t work, then the mill isn’t going to reopen and the mine won’t be generating royalties.

Digital entrepreneurs are making millions from small hamlets around the globe, except for those in Ontario’s north. Want to run a digital start up? In most cases you better head south first. It’s the same with medical advice, even diagnostics. Much of it can now be delivered via smartphone. But you would be hard pressed to find world leaders in online education, health care, licensing, permitting, or approvals here in Northern Ontario. We tinker, occasionally we compete, but rarely do we lead.

Why is that? Well, for starters let’s return to that CRTC map for a second. Your community earns a colour if one house, yes just one, within 25 square kilometers has 5 megabits per second download and 1 megabit per second upload.  For those who don’t bit-speak, a quick internet search tells me the fastest internet speeds in the world include places like Singapore, averaging 60.39 megabits per second, Sweden at 46, Denmark at 43.99 and Norway at 40.12.

But this isn’t just about access or even speed. The impact of highways did not arise simply from the laying of pavement and the building of bridges. Safety standards for cars had to be created, rules for using the roads had to be developed, tested, and refined. Driver training, new law enforcement protocols and tools, signage, and an entirely new common language and set of symbols had to be thought out and implemented. Why is red stop and green go?

The populace had to be reeducated too. People didn’t just leap from their horse into a car and start travelling thousands of miles for vacations or hundreds of miles for work. It is the same for this new digital world. Yes, our kids come out of the womb with a smart phone attached and posting on snapchat. It’s the rest of us that still need to be made more comfortable with having our information “in the cloud”.

A government serious about a sustainable future for Ontario’s northern regions would be looking to make the north a digital powerhouse. Expanding not just connectivity but capacity. If a Finnish grandmother can check her CT scan online, why can’t we? If a Norwegian fisherman can sell his catch to a Japanese fish monger, why can’t we? When I hear a Premier or Prime Minister talking about the latest Anishinaabe tech millionaire, or how diabetes has been beaten by low cost high tech intervention, that will be something completely different.

Charles Cirtwell is the founding President and CEO at NPI.