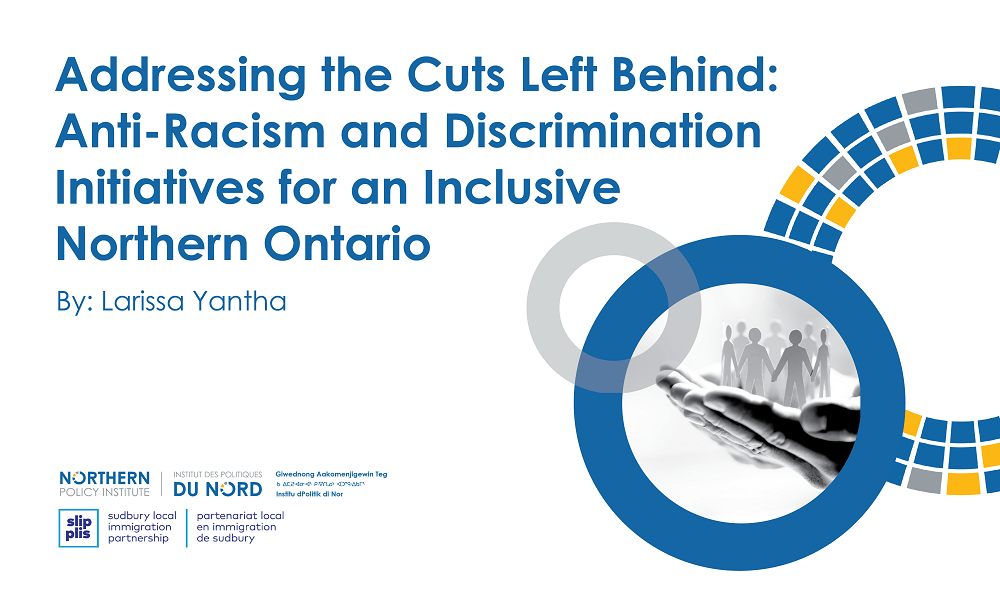 Achieving a prosperous Northern Ontario relies heavily on the ability of its regions to effectively attract, settle, and retain immigrants, refugees, and the existing population. Unfortunately, immigrants and diverse groups still face significant barriers to success and are ultimately falling behind their non-immigrant counterparts. Ideally, a welcoming community should provide adequate housing, accessible transit, employment, language, cultural supports, and services that are essential to providing every opportunity for immigrants and diverse groups to succeed.

Ultimately, looking to other communities to understand best practices in creating communities that are anti-racism and welcoming to all diverse groups is important for steering the direction of Greater Sudbury and Northern Ontario communities in an effort to be more welcoming, not just for immigrants and diverse groups, but for all members of the community.

The findings of this series will be used by Sudbury’s Local Immigration Partnership (SLIP) to be applied to their decision-making regarding programming and initiatives focused on creating a more welcoming community.

Read the series below!

Addressing the Cuts Left Behind: Anti-Racism and Discrimination Initiatives for an Inclusive Northern Ontario

Conversations about racism and discrimination are not supposed to be easy. There can be a frankness to them that is easy to turn away from and file “For Later”. During the recent 2021 Magnetic North conference that focused on migration, reconciliation, and anti-racism/discrimination in Northern Ontario, a panel of individuals had that frank conversation with the audience. It was at this time that more unmarked graves of First Nations children at the former residential school on Cowessess First Nation were discovered and brought to light.

Using Art as a Catalyst for Change

Srimoyee Mitra is a performance artist, curator, and writer. In 2008, she developed an art installation titled Let’s Talk, Get to Know Each Other Better, We Are All Human at the Art Gallery of Ontario. Her projects have been included at conferences at the University of Toronto and in art galleries across Canada. Since 2008, she has worked at SAVAC (South Asian Visual Arts Centre) in Toronto (Mathur, DeGagné and Dewar 2011). She is of South Asian heritage and uses her experiences as an immigrant to Canada and her interest in socially relevant projects to engage with artists and audiences alike (STAMPS n.d.).

Change Comes from Within at the City of Saskatoon

The City of Saskatoon recognized that as newcomers began moving more frequently to rural and small urban communities, including their city of approximately 273,000, the potential for racism and social rifts increased. In 2016, it began brainstorming ways to ensure that newcomers felt welcomed and understood by long-time Saskatonians. This led to initiatives like I Am the Bridge, which focuses on individuals and their role in preventing racism and discrimination (City of Saskatoon n.d.).

The Hamilton Centre for Civic Inclusion (HCCI) is an organization that was created as a response to the burning of a Hindu temple in Hamilton, Ontario, on September 14, 2001. The goal of the HCCI is to give Hamilton residents access to knowledge and resources that are required to build a racially diverse and welcoming community. It has produced several programs and services, including initiatives targeting youth, conversation groups, and training programs. Although each of their programs are unique and successful, one in particular stands out for operating primarily through social media—the #HamiltonForAll campaign (Ontario Human Rights Commission 2010).

Reducing Racism in the Housing Sector

LUSO Community Services is a Southwestern Ontario-based nonprofit neighbourhood resource centre that services Northeast London. It was originally funded by United Way but is now mostly funded by Immigration, Refugees and Citizenship Canada (IRCC) (Rodriguez 2021). It is dedicated to promoting inclusiveness and the well-being of all demographics in the London community. LUSO believes in diversity and the benefits it can bring to cities, so it celebrates the cultural differences that make up London. It recognizes the unique needs and circumstances of newcomers and thus focuses on providing educational programming that can improve lives, reduce poverty, and reduce unemployment (LUSO n.d.).