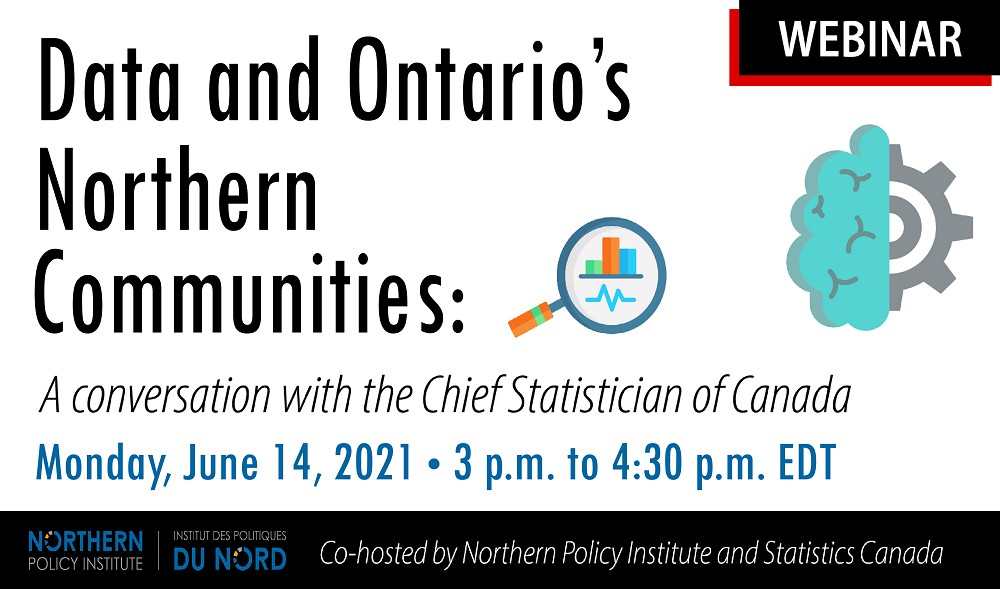 Data and Ontario's Northern Communities: A conversation with the Chief Statistician of Canada.

As communities continue to navigate the "new normal" in the post-COVID world, we reflect upon how this pandemic has impacted many aspects of our lives. Northern Ontario businesses and organizations continue to struggle to recover, and are faced with the reality that many daily activities may never return to pre-pandemic normalcy.

Available Statistics Canada data—both from existing and new surveys—can provide helpful insight into regional economic recovery. As our landmark survey, the census is one of the most important sources of data for Canadians and communities throughout the country. It helps us understand where we came from, where we are, and where we are going. Census data will also provide further insights into the impact of COVID-19 and various economic supports.

This webinar took place on June 14, 2021. If you missed the discussion, check out the video recording of the session below!

Anil Arora is an experienced senior public official, having worked at Statistics Canada for over 25 years leading significant programs and transformations. He was appointed Chief Statistician of Canada in September 2016. He has also served in policy and regulatory roles in the Government of Canada at Natural Resources Canada and Health Canada. Mr. Arora has led substantive international initiatives, working with the United Nations and the OECD, and received numerous prestigious awards for leadership. He serves on a number of boards and is active in community events and social causes.

Based in Thunder Bay, Charles’s work on education, fiscal management, debt reduction, taxation, the growth of government, and the importance of government accountability regularly appears in local, regional and national media. His published works focus on government structure and organization, business-government relations, inter-governmental relations, performance measurement and accountability. He has spoken across Canada and the United States on the role of think tanks in society, the appropriate assessment of government activities, and the use of school performance data to improve classroom practice and fully engage all education stakeholders.

He currently serves as an adjunct member of the Rural Ontario Institute’s Board of Director, and has had leadership roles in multiple community organizations. He attended Dalhousie University, earning a BA in Political Science, an LLB, and an MPA with a focus on quantitative and qualitative assessment of public policy and programs.