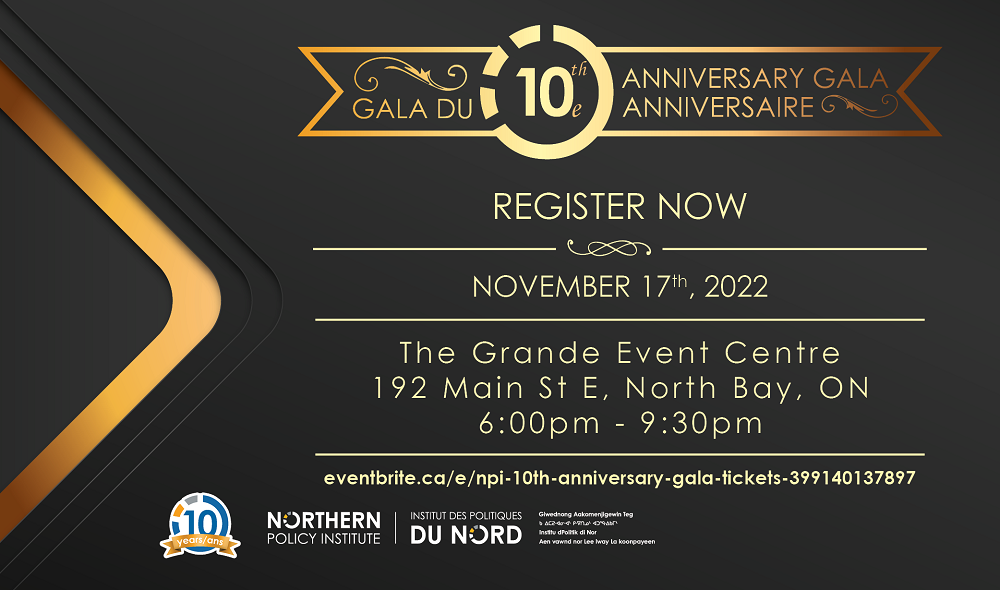 About our 10th anniversary gala event

In the last decade NPI has supported and, in some cases, played a central role in the development of the rural and northern immigration pilot, the expansion of First Nations control of First Nations education, the piloting of the 2 plus 1 road model here in Northern Ontario, the growth in programs to support newcomers, increases in community and workplace supports for First Nation/Métis/Inuit populations already here, the expansion of bus service from Toronto to Winnipeg and, the reintroduction of the spring bear hunt. To name just a few of our successes.

NPI is a federally registered charity for educational purposes. The 10th Anniversary Gala is both a celebration of our first decade and a fundraiser. A tax receipt for $100 will be issued for each individual ticket purchased and $800 for every table of ten.

Dr. Ken Coates is Professor and Canada Research Chair in Regional Innovation, Johnson Shoyama Graduate School of Public Policy, University of Saskatchewan, and a Fellow, Royal Society of Canada. An internationally known expert on Indigenous issues, Dr. Coates will address Rebuilding Nations: Transforming Northern Ontario by Renewing Nation to Nation Relations, a talk based on a paper series that NPI will be releasing the day after the Gala.

Some Kind words about the impact NPI has made in Northern Ontario!

"NPI is the go to organization to apply the “Northern Ontario” lens to all policy issues to ensure a viable, sustainable economy and one that is positioned to adapt to an ever changing economic landscape. (2016)

"Congratulations to NPI on the launch of Community Accounts. As a Regional Manager for Northern Ontario who works with over 131 Northern Municipalities, access to information regarding the communities we serve helps our team understand the composition and demography of our stakeholders. The website provides easy access and well presented data for anyone to obtain.” (2017)

"NPI is a champion for Northern Ontario, promoting its many opportunities and connecting various organisations to foster collaboration and progress against societal, environmental & economic priorities. The NPI team consistently produces quality research and develops pertinent and exciting programs. Their work can empower any group with an interest in Northern Ontario to better fulfill its mission." (2020)

A Look Back at NPI's First Decade of operation